BOOK REVIEW: A Cold Day For Murder by Dana Stabenow 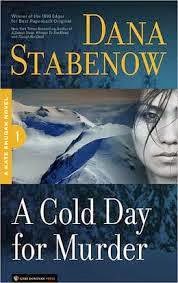 Goodreads synopsis: Kate Shugak returns to her roots in the far Alaskan north, after leaving the Anchorage D.A.'s office. Her deductive powers are definitely needed when a ranger disappears. Looking for clues among the Aleutian pipeliners, she begins to realize the fine line between lies and loyalties--between justice served and cold murder.

I was expecting a lot more from this book based on a series recommendation from one of the YouTube beauty gurus that I follow. It was interesting, don't get me wrong. This book has one of the greatest settings I have read but the mystery was wrapped up too easily. And the last great revelation took place in the main character's head which made me want to scream because I like to follow along with how the character figures out things in order to come to the answer.

The love interest character of Jack wasn't described enough in order for us to fall in love with him too. I mean, isn't that what books are all about. You, the author, make us fall in love with your characters and root for them. I thought the character of Able could have been developed a bit more in order for us to come to the same conclusion as Kate did. She obviously knew everyone in the cast better than the reader of this book.

I did like getting a glimpse into this native-American-ish (I don't know what else to call it) civilization where people look down on what they call the Outside. That is anywhere that isn't this national park.

This book follows Kate Shugak as she tries to find a missing park ranger and a friend/lover of hers. Both missing. Both suspected dead. For the first man 6 weeks had gone by, for the latter, two weeks. And it is up to Kate to trail them and discover what truly happened to them. Kate lives in Alaska, not sure if I mentioned that. It is arctic cold up there and this makes searching for these men even more of a challenge. Like I said above, the setting was depicted in great detail.

Since this is the beginning of a series, I can see how this book is just laying groundwork for later books, but I did expect more. But I do plan on reading more in this series.

I bought this book for my Kindle. But I don't think bought is the right word since the book was FREE! So, if this sounds interesting to you, go and get it now.