BOOK REVIEW: Fit to be Dead by Nancy G. West 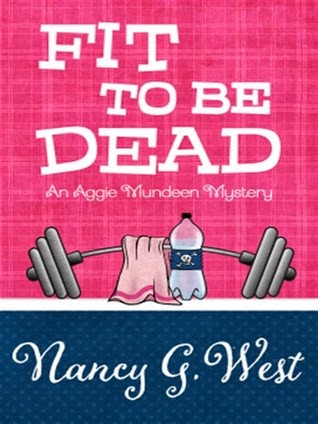 Goodreads synopsis: In this first Aggie Mundeen mystery caper, Aggie, pushing forty and obsessed with becoming decrepit, writes the column, “Adventures in Staying Young.” When she moves to San Antonio, Texas, she has to shape up before anybody discovers she’s the author. She takes Aspects of Aging at University of the Holy Trinity and dives into exercise at the health club. Rusty at flirting and mechanically inept, she irritates a slew of male exercisers, then stumbles into murder.

I do understand that this being the first in a series that there is a lot of info dropping that needs to be done and character-getting-to-know, but I found this mystery just okay. First off there was way too much of Aggie reading up for her class, the one she hardly ever attends. Plus, we don't get enough of Sam's perspective in order for us to come to the same conclusion as the characters do when solving the mystery. I know that is a niggle, but I like following the mystery. I like knowing where I was fooled by the author. To me, the following of the mystery is half the fun of reading a mystery.

There was a bit of a confusion for me in one part. Aggie is doggedly going after solving the mystery of who put the radio in the swimming pool and nearly hurting her friend. But when same friend is later killed, she tries to talk herself out of the search for the killer. So, why be so gung-ho in one instance and so standoffish in the other? That part I didn't get but once she got going the mystery was interesting.

The book that I read before this was so outstanding in not only the flow of the text but the vastness of the story that I think it made this book seem dim in comparison.  In light of that I gave this book 3.75 Stars. It could have been better. Better flow in the text, better use of Sam the detective, better overall-ness in the plot. But it was a good, decent read.

I received this as an ARC (Advanced Reader Copy) from Net Galley in return for an honest review.
Posted by Toni at 7:29 AM