BOOK REVIEW: Forget Me Not by Fern Michaels 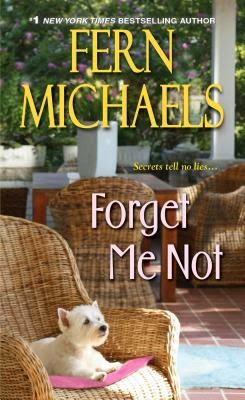 Goodreads synopsis: Illustrator Lucy Brighton loves her work. Her animal characters Izzy, Bizzy, and Lizzy have their own comic strip, card line, and children’s cartoon, and their popularity has given Lucy financial stability and freedom. Yet none of that quite erases the lingering ache of a cold, lonely childhood. Sent away to boarding school at ten, Lucy spent little time with her parents afterward, and her few visits home only seemed to widen the gap between them. Even though she still lives in the New Jersey house where she grew up, Lucy has had little contact with her parents since they moved to Florida five years ago. Then they are killed in a car crash and all heck breaks loose.

My mom asked me to check this book out. Someone had let her borrow it and she said it sounded like it was something I would have written.

This gal had a heck of a time during the span of the book. Her comic strip empire was taking off to bigger heights and then she discovers that her parents are killed in a car accident. She spent much of the book thinking there was something wrong with her because she felt nothing for the loss of her parents.

The thing that really got my goat in this book was Luke and how he fell into insta-love with Lucy. I mean, he meets her at the front door, they talk for a hot minute, then later he calls her on the phone and they speak for five minutes and suddenly he is so in love with her he rushes to New Jersey to save her when the FBI come a calling on his doorstep.

The rest of the book was interesting. The twist at the end was good. My mom told me what it was which errked me a bit but all in all, a great read. Definitely recommend Fern Michaels to anyone who likes romance.