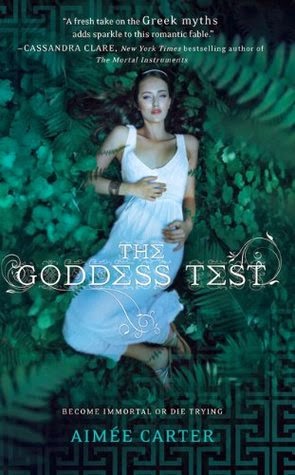 Goodreads synopsis:
Every girl who had taken the test has died.
Now it's Kate's turn.
It's always been just Kate and her mom - and her mother is dying. Her last wish? To move back to her childhood home. So Kate's going to start at a new school with no friends, no other family and the fear that her mother won't live past the fall.
Then she meets Henry. Dark. Tortured. And mesmerizing. He claims to be Hades, god of the Underworld - and if she accepts his bargain, he'll keep her mother alive while Kate tries to pass seven tests.
I am not sure what possessed me to pick up this book but I just felt compelled to pull it from the middle of a stack of books. I am a big fan of the Greek Gods and am ready to start reading the "House of Hades" by Rick Riordan. Hades has always scared me a bit. He never was one of my favorite Greek Gods and I never thought anyone could make me like him. But Aimee Carter did just that. In fact, I loved her portrayal of Hades "Henry" in this book. Since I am familiar with the Persephone myth, I was excited to see it portrayed here.
This book was emotional and heart-wrenching at times. Kate was going through a lot with the death of her mother. And to have all these Gods and Goddesses put her through deception after deception, I am not sure any one of us could stand up to such a trial. This book made me look at my perceptions about Hades and begin to humanize him, for lack of a better term. He became more real, more of someone to understand instead of hate.
I thought this was a wonderful book and I gave it a much deserved 5 stars! I am already reading the novella THE GODDESS HUNT because I just can't get enough of Hades (Henry).

At the end of the book it tells you who each of the Gods were in their human guises. I had no idea that Hera was that particular character. I am glad I didn't know at the time because it would have colored my love of the book. I figured out who Ava was and Kate's mother but that was all. I was surprised who James turned out to be. Happily surprised.
Posted by Toni at 9:14 AM