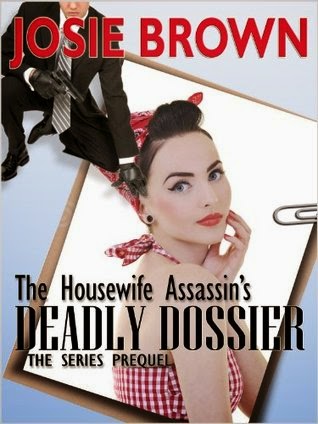 Goodreads synopsis: Finally—Donna Stone, as you've never seen her before: through the eyes of those who affected her life the most.  In this full-length prequel to The Housewife Assassin series, Acme Industries black-ops agent Jack Craig is tasked with investigating the mysterious death of his organization’s most prolific hit man, Carl Stone, only to fall in love with the dead man’s wife, Donna—a woman he must never contact, but who may hold the key to her husband's disappearance. When Acme approaches Donna to join their organization as an assassin, Jack’s undercover mission will change both their lives forever.

This is definitely my genre! I am hooked on reading and writing about spies. (You could probably tell that from my Twitter name: tonispywriter.) This is what makes reading for Net Galley a real pleasure: You get introduced to books you might never come across.

It took me a hot minute to figure out who was the star of the narration since so much happened at the beginning of the book. At first I thought it might be Donna's husband, Carl, but quickly came to realize it was Jack Craig. He is an interesting fellow. And in one part when Carl was acting very un-Carl-like, I thought he was Jack. (Come to find out that little tidbit about Jack and Carl became a bit of a spoiler for me later on. You will just have to read it to know what i mean.)

I enjoyed following Jack as he practically fell in love with the image Donna portrayed to her other suburbanites. Underneath it all, Donna was a bit of a rebel. I don't want to go into too much detail about the plot but it sure kept my interest the entire time. I have already bought book one and book two. (This is the prequel to the Housewife Assassin series.) You should pick up book one for sure. It's FREE!

One little note about reading this sucker. Pay attention to everything. You might need to remember it for later. I read this on my Kindle but wished I had it in paperback just so I could go back and check my memory on certain facts.

This is definitely a great one for sure. Check it out if you like the spy genre that is filled with fun antics. 5 Stars!

I received this as an ARC (Advanced Reader Copy) from Net Galley in return for an honest review. I thank the publisher and Net Galley for allowing me to read this book.
Posted by Toni at 1:42 PM