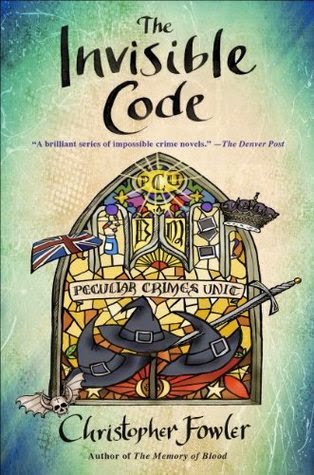 A young woman is found dead in the pews of St. Bride’s Church—alone and showing no apparent signs of trauma and Peculiar Crimes Unit, an eccentric team tasked with solving London’s most puzzling murder, want the case, but initially they don't get it. Then when a second bizarre death shows a link with the first, the Unit is called in to investigate and Bryant and May set off on a trail of clues.

I have not read any other books in this series so it was hard for me to get up to speed. Initially, I could not figure out who the main characters were since so many police were introduced along with a slew of minor characters. I had a hard time following the mystery since there would be chapters following the minor characters. I almost wish they would have left those sections out because it made, for me, the entire thing more confusing.

I'm sure the mystery made sense in the end, but I couldn't follow it. And I am a person who loves to follow the mystery. Maybe I am not a good British mystery reader, but I was lost most of the time. And because of that I was bored and confused.

I give this book 3 stars for the complex mystery because I can appreciate a convoluted mystery, but for the read itself, I gave it only 2 stars. I don't think I will try to pick up another Christopher Fowler book due to my experience with this one, sorry to say.

I received this book as and ARC (Advanced Reader Copy) from Net Galley in return for an honest review.
Posted by Toni at 7:05 AM