BOOK REVIEW: The Legend of the Blue Eyes by B. Kristin McMichael 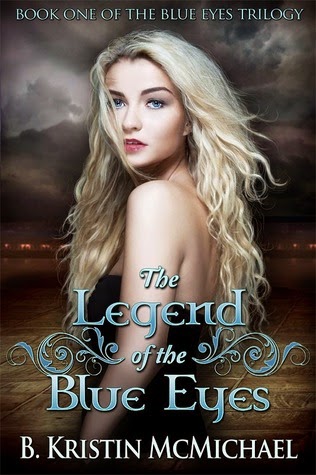 Goodreads synopsis: Arianna Grace liked her boring, Midwestern, teenage life where she ignored the many unanswered questions of her childhood. Why were her parents dead? Why did she not have family? Where was she raised until she was five? When someone offers to explain it all, Arianna thinks she’s just getting answers. Instead, she is thrown into a world of night humans who drink blood.

I thought this book was an interesting take on the vampire genre. They can be out in light but only after 2pm. There are two types of vampires that are designated as night people: Baku and Dearg-dul. Four main clans of night humans are struggling for control of the night. They are divided into two sides, clans Baku and Tengu have been at war for centuries with the clans Dearg-dul and Lycan. Arianna is a combo of both Baku and Dearg-dul and she is the vampire of legend with the blue eyes that are supposed to bring the clans together.

I thought the story was okay. I was a bit disturbed by the fact that she, Arianna, had to have 5 different suitors each from a different clan (one being human). What does that teach our youth about love and commitment? But beyond that, this book was just your basic introduction to the series to come. It ended on a high note and the point of Arianna's biggest stress. She is in charge: now what?

I gave this book 4 stars because it was a clever introduction to a new look into the vampire genre. The characters were interesting and they each had their unique voice which was easy to distinguish one from another.

I received this book as an ARC (Advanced Reader Copy) from Net Galley in return for an honest review. Thanks to the publisher and the author for letting me read this.
Posted by Toni at 7:02 AM