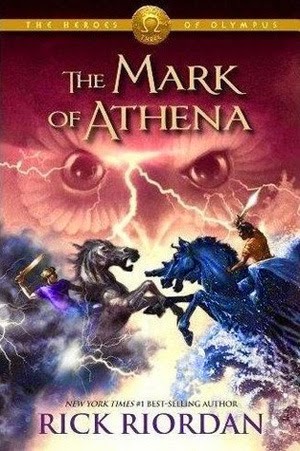 This book starts off where the last book (Son of Neptune) ended. It is the third book in the Heroes of Olympus series. Seven demigod heroes both from Greek and Roman camps have to sail to Rome on the Argo II and save Hazel's brother, Nico, kill the Giants and somehow reunite the Greek and Roman pantheons. Their is a lot going on in this book. Annabeth is tasked to follow the "Mark of Athena" and avenge her mother. Athena is a bit miffed that the Roman's demoted her to a craft goddess when she was all about wisdom and war previously. All the gods had a bit of a schtzo nature in this book waffling between their Greek and Roman names. Aphrodite however, doesn't change much since she is pretty much the same goddess in either pantheon. I enjoyed getting to know the Roman names of the Gods since I am not as familiar with those names as I am with the Greek names.

It took me a bit to get through this book. Not because it was over 500 pages long in hardback but because I had other books I needed to read in between. I had been three quarters done when I had to put it away for a few weeks. But I was glad to pick it up again  and get myself out of my reading slump. The author makes it so easy to read. It is almost like watching a movie in your head that you forget that you're reading actual text.

Great book. Highly recommended. 4 Stars!
Posted by Toni at 8:41 AM