BOOK REVIEW: Mission: Out of Control by Susan May Warren 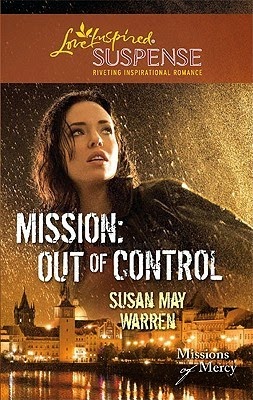 Goodreads synopsis: Brody "Wick" Wickham is a former Green Beret turned security agent--with a 100 percent mission success rate. No way is his new assignment changing that. Even if it's protecting a "diva" American rock star while she's on tour in Europe. Except Veronica "Vonya" Wagner isn't just a beautiful celebrity used to having her way--she's the daughter of a U.S. Senator. And she's hiding a dangerous secret.

This book was exciting and really kept you on your toes. The main character girl's name changed based on whom she was talking to. Her father referred to her as Vernoica, her friends called her Ronie, and her fans called her Vonya. She is portrayed as a very Lady GaGa-ish singer. But she was sort of like Angelina Jolie in her humanitarian efforts. She was trying to get a kid soldier saved, someone she had sponsored at one time. She wanted to bring him to America and make him her own child. And this motive gets her into a lot of trouble because she is involved with many unscrupulous people in order to gain her ends. In a way she is naive in her thinking about how the world works. She is from a life of privilege  and wants to stand on her own two feet but comes running to Daddy when the funds run out. She isn't in control of her finances and lets her manager and college friend take advantage of her niceness.

Brody comes in with his own motives. He wants to help his family save their house from going into foreclosure. He is one of multiple brothers and sister in this family but he feels responsible for them. He currently lives in Prague which is cool in itself but it distances him from his family and dealing with family issues. I like the part at the end where they show how Brody is Ronie's bodyguard like God is all our bodyguards. He keeps us from harm even to our own detriment.

This was a great book. I wanted to strangle the main character gal quite a few times but all in all, one great ride! 4 Stars!
Posted by Toni at 8:27 AM