BOOK REVIEW: Shadows of the Silver Screen by Christopher Edge 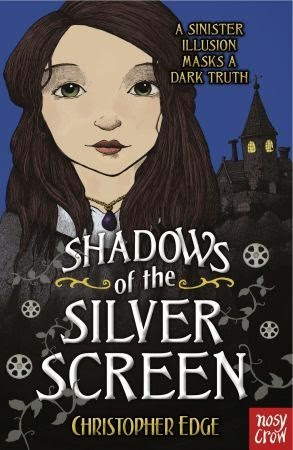 A mysterious filmmaker approaches The Penny Dreadful with a proposal to turn Montgomery Flinch’s sinister stories into motion pictures. Penny, who is the real writer behind the success of her alias Montgomery Flinch, is only a teenager. So she has hired an actor they call Monty to take over her alias' persona. The filmmaker uses an unusual new type of camera that not only puts sound and images together,  it makes the ghosts from the past appear!

I have to admit that I picked this book purely based on the cover image. I thought it was going to be a cozy mystery. Boy, was I wrong. This is set in between 1900 and 1920-ish. The motion picture craze has yet to start and before this time all they had were silent pictures that were the new craze. Penny writes really horrific and mysterious stories that have the public awed. And this filmmaker wants to put her words to screen.However, Monty, being an actor, wants to be in this movie as well and convinces Penny to accompany him.

I think this was a great book. The setting was interesting. I wished more than once there was a phone or some easy way to contact other characters who are 150 miles away. The mystery kept me hooked. I enjoyed the characters as well. I will definitely look into other books by this author. Nice accidental find.

I received this book as an ARC (Advanced Reader Copy) from Net Galley in return for an honest review. I thank the publishers and Net Galley for allowing me this privilege.
Posted by Toni at 6:52 AM