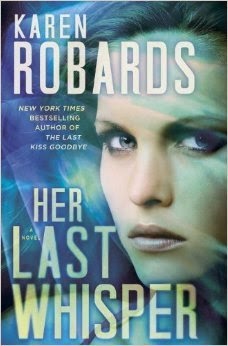 Goodreads synopsis: The last time criminal psychology expert Dr. Charlotte “Charlie” Stone helped capture a serial killer, it was nearly the last thing she ever did. Now she’s determined to stick to research—and leave risk-taking to the law. But when dangerous duty calls, she can’t refuse. And there’s no greater danger than the Cinderella Killer, a charming predator who lures beautiful, single women to their deaths. FBI agent Lena Kaminsky fears her missing sister has fallen prey to the seductive psychopath, and desperately needs Charlie’s unique skills before it’s too late. Joined by Special Agents Tony Bartoli, Buzz Crane—and her ghostly bad-boy lover, Michael Garland—Charlie heads to Vegas to track down Lena’s sister before the Cinderella Killer seals her fate. But it’s Charlie who ends up gambling with her life, when the lethal Lothario decides she’s just his type

I really didn't know what to expect when I picked up this novel. I had not read the first two books in the series so I was thrown into the fray after two books of experience between criminal psychologist and serial killer expert Charlie "Charlotte" Stone and Michael Garland, suspected and convicted serial killer.

If you didn't know... Michael is DEAD. He is a spirit. And he totally has the hots for our Dr. Stone. Charlie and the team at the FBI consisting of Tony Bartoli, Buzz Crane and Lena Kaminsky contact Charlie to assist them with another case, the case of Lena's missing sister! in Las Vegas, no less. It is a big step for Lena to ask Charlie for help. Lena has had a big chip on her shoulder since book 1 (Yes, I have read all the books by the time of this review). And I am shocked she would ask Charlie to help her. So, you can see how desperate Lena is. Turns out Lena's sister isn't the only missing person. There have been many over the years that were either not listed as missing or missed in the police system.

Charlie is as insistent in this book as in the others that she wants a relationship with the handsome FBI guy, Tony, but she has yet to act on those feelings more than a kiss. I don't think Michael jumping into said FBI guy's body and putting the moves on Charlie counts.

The ending of this story is a bit of a shocker and it makes me wonder if another "Last" book is in the works. I mean, how can you end it like that, Ms Robards? What can I say. It left me wanting more Charlie and Michael stories. It is a truly outstanding series that really shows off the expertise of Karen Robards.

I received this as an ARC (Advanced Reader Copy) via Net Galley in return for an honest review. I thank the publisher, author and Net Galley for allowing me to read this novel.
Posted by Toni at 9:44 AM