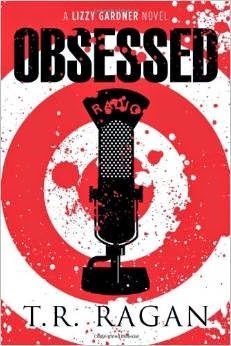 Goodreads synopsis: Desperate for better ratings, radio psychologist Madeline Blair tells her listeners she’s being stalked, unaware that her long-time listener and biggest fan, Seth Brown, will do anything to protect her. When her publicity stunt is revealed, Seth becomes enraged by her deceit and dangerously unhinged. When her friends mysteriously begin to vanish and damning evidence points to Madeline, she turns to private investigator Lizzy Gardner for help. Lizzy knows her way around a murderer’s mind, after surviving her own horrifying ordeal at the hands of a serial killer years ago

I thought this book was interesting. There were quite a few characters that I enjoyed like Kailey (not sure if I'm spelling that right). I thought Madeline, the radio show host could have been redeemed but it was for naught, I guess. I wasn't particularly captivated by Lizzie. In fact, I kept getting her and Haley confused. There were quite  few times I thought I was following Lizzie and it was Haley. I have not read the previous three books in the series and I am not sure if reading those would make a difference in my experience or not, but it may.

The mystery was interesting. The bad guy/psycho just kept getting creepier as time went on. And mostly the story was good. I gave this book 3.5 stars because of the confusion about characters and the fact that  Lizzie, the PI, doesn't even meet Madeline until nearly half way through the book. There was a lot of unnecessary backstory about minor characters included. I would definitely like to see a spinoff series about Kailey in the future.

I was surprised by the ending which was a quite surprising cliffhanger. Even what happened to Madeline at the end was a surprise. So all that was good. I guess this book could use a bit of tweaking and it would be great.

I received this as an ARC (Advanced Reader Copy) from Net Galley in return for an honest review. I thank Net Galley, the publisher and author for allowing me to read this book.
Posted by Toni at 6:53 AM