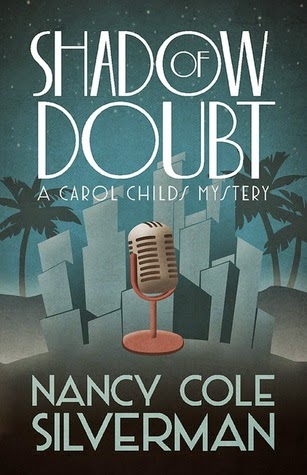 Goodreads synopsis: When a top Hollywood Agent is found poisoned in the bathtub of her home, suspicion quickly turns to one of her two nieces. But Carol Childs, a reporter for a local talk radio station, doesn’t believe it. The suspect is her neighbor and friend, and also her primary source for insider industry news. After a media frenzy pits one niece against the other—and the body count starts to rise—Carol knows she must save her friend from being tried in the court of public opinion.
But even the most seasoned reporter can be surprised, and when a Hollywood psychic shows up in Carol’s studio one night and warns her there will be more deaths, things take an unexpected turn. Suddenly nobody is above suspicion. Carol must challenge both her friendship and the facts, and the only thing she knows for certain is that the killer is still out there. But the closer she gets to the truth, the more danger she’s in.

I enjoyed seeing the radio aspect to this book. I work in the newspaper industry so to me it was very resonating. I had a good time trying to figure out who the killer was. And the dang lady fooled me. I fell for all her red herrings. I should know better. I did have a brief inkling that character was the bad guy but I quickly moved to who I thought was the culprit.

This book was crafted so well I felt like I was reading reality television. Having the inside view of the action was really cool. Carol was just in the perfect spot to get all the juicy details about what was going in the lives of the dead Hollywood agent, her two twin daughters and starlet client with the the mysterious past. Even the addition of Mystic Misty was quite the hoot. I wouldn't mind seeing her in future books. If you love Hollywood and mysteries, then this book is definitely for you.

I received this as an ARC (Advanced Reader Copy) from Net Galley in return for an honest review. I thank Net Galley, the publisher and the author for allowing me to read this title.
Posted by Toni at 9:13 AM