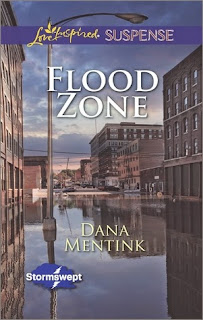 Goodreads synopsis: PRIME SUSPECT  - Mia Sandoval's friend is murdered under mysterious circumstances—and the single mother is a suspect. Her only ally is a man she isn't sure she can trust. Search and rescue worker Dallas Black has a past as harrowing as Mia's own, and the police are suspicious of them both. With no choice but to work with secretive Dallas, Mia discovers he's as complicated as the murder they're forced to investigate to clear her name. Yet as a flood ravages their small Colorado town, a killer is determined that Mia, Dallas and their evidence get swept away to a watery grave.
Stormswept: Finding true love in the midst of nature's fury.

I went into this book thinking I was going to like it since I totally fell in love with Dana Mentink's Lost Legacy story. But I found this book to be failing... failing to keep my interest. I struggled to get through this book. I don't know if it was that I did not connect to the main character, Mia or that the story line did not appeal to me. Usually, this type of story line is my cup of tea, but with this book it definitely wasn't. I was relieved when I finally skimmed through the ending and found the resolution.

I gave this book 3 stars since I normally do like this type of story and i can see how others would really enjoy it. And I do not want to bring down the ranking by giving it a 2 stars which is how I really felt about it.

I hope this doesn't keep me from reaching for any Love Inspired Suspense novels in the future.

I purchased this book with my own money.
Posted by Toni at 11:44 AM No comments: 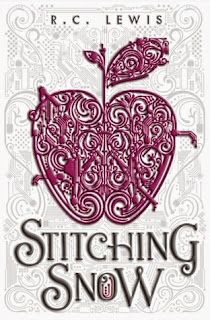 Goodreads synopsis: Princess Snow is missing.
Her home planet is filled with violence and corruption at the hands of King Matthias and his wife as they attempt to punish her captors. The king will stop at nothing to get his beloved daughter back—but that’s assuming she wants to return at all.
Essie has grown used to being cold. Temperatures on the planet Thanda are always sub-zero, and she fills her days with coding and repairs for the seven loyal drones that run the local mines.
When a mysterious young man named Dane crash-lands near her home, Essie agrees to help the pilot repair his ship. But soon she realizes that Dane’s arrival was far from accidental, and she’s pulled into the heart of a war she’s risked everything to avoid. With the galaxy’s future—and her own—in jeopardy, Essie must choose who to trust in a fiery fight for survival.

I wasn't sure what to expect when picking this book up. And I got way more than I expected. Definitely one of the top books of this year for me so far. Definitely movie material here.

I think what I was expecting was something written by the Disney formula and forcing all the things to fit into nice neat packages in order to make the story move forward. But that isn't what I got. What I got was this great storytelling, keeping to the main theme of Snow White in the most generalist of ways, but really exploring themes that can kinda scare kids. Snow/Essie as a character is truly empowering. She had to overcome a whole lot to get to where she was and at the end you learn the terrible price she had to pay back then and why she kept it a secret.

This is a story that is loosely based on the fairy tale of Snow White. You have the evil queen, you have her hatred of Snow (aka Essie), and you have the prince. All the dwarfs have been replaced by interesting robots that Essie created to help the miners on the plance of Thanda where she has been living for the last 8 years (or should I say "hiding out"?).

Essie does extreme fighting with the other miners in order to gain their respect as well as some needed money to pay to fix her robots (a technique she calls "stitching".) Essie is basically a hacker. She fiddles with code in order to make things work on Thanda. Because of her expertise, she has made the mining colony on 42 the most prolific among all the other mining areas. She gives them a better life because now with the robots assisting many of the men won't die early deaths.

What everyone doesn't know is that Essie, this unassuming girl, is the princess of  very fruitful planet. And a man, Dane, whose father has been imprisoned due to Essie's escape from the kingdom, wants to trade Essie for his father's release.

This is just a great, great book. It really pulls you in and you get invested immediately into the lives of the characters. A real action-packed tear-jerker. Check this one out, definitely!

I received this as an ARC (Advanced Reader Copy) from Net Galley in return for an honest review. I thank Net Galley, the publisher and the author for allowing me to read this title.
Posted by Toni at 7:44 AM No comments:

Book Review: If The Shoe Kills (A Tourist Trap Mystery #3) by Lynn Cahoon 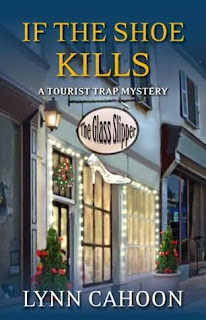 Goodreads synopsis: The tourist town of South Cove, California, is a lovely place to spend the holidays. But this year, shop owner Jill Gardner discovers there’s no place like home for homicide. . .
As owner of Coffee, Books, and More, Jill Gardner looks forward to the hustle and bustle of holiday shoppers. But when the mayor ropes her into being liasion for a new work program, 'tis the season to be wary. Local businesses are afraid the interns will be delinquents, punks, or worse. For Jill, nothing’s worse than Ted Hendricks--the jerk who runs the program. After a few run-ins, Jill’s ready to kill the guy. That, however, turns out to be unnecessary when she finds Ted in his car--dead as a doornail. Officer Greg assumes it’s a suicide. Jill thinks it’s murder. And if the holidays weren’t stressful enough, a spoiled blonde wants to sue the city for breaking her heel. Jill has to act fast to solve this mess--before the other shoe drops. . .

Looking for a thrilling local tourist destination? You might want to check out South Cove. This is the place where mystery abounds. This is book three in Lynn Cahoon's Tourist Trap Mystery series.

Local book and coffee shop owner, Jill Gardner just can't keep from running over dead bodies in the small town of South Cove. Not literally, mind you, but in this case, she did find the most recent victim inside his car.

Ted Hendricks was not her favorite person. In fact, he was quite a dweeb, a jerk and many other names you can't express in a blog entry or a review. As the new liasion to the work program, Jill spends too much time having to deal with Ted. She really enjoys working with the young person placed through the program who is a great fit in her own shop, Coffee, Books and More. Others in the business community really are enjoying their newfound help too.

Even with Thanksgiving approaching and everyone under the sun coming to dinner at her house, Jill can't help digging into Ted's background when her boyfriend, Officer Greg tells her to stay out of his case. Clues lead her to Marie, a local craftswomen who creates stainglass fixtures and teaches the craft to others. The closer she gets to the killer, the more things fall apart in the city. The Mayor's wife wants to be in charge of decorating the city for Christmas and boots out the lady who normally was in charge of that. Then Officer Greg's old flame shows up in town and trips on the sidewalk breaking the heel of her fancy designer shoes and wants to sue someone for pain and suffering.

And so goes the story, one mishap after another, one stressor after another until someone wants to kill someone else, and hopefully it isn't Jill Gardner.

There were a few times in the story I really wanted to throttle a few people. I could even recognize a few from my own life. I think we all have them, those people want to be in control and want the glory but don't want to do any of the work. The only think I could have wished for in a perfect world was that the Mayor's wife had some sort of consequences for her actions. That would have been sweet. I really loved this one. The town of South Cove is just a place you want to curl up in and stay awhile.

This is definitely a story that will rile you up while you root out whodunit. It's a fast-paced, thrill ride that will leave you wanting more. Definitely check this one out.

I received this as an ARC (Advanced Reader Copy) from NetGalley in return for an honest review. I thank NetGalley, the publisher and the author for allowing me to read this title.
Posted by Toni at 2:46 PM 1 comment:

BOOK REVIEW: Beyond a Doubt by Nancy Cole Silverman 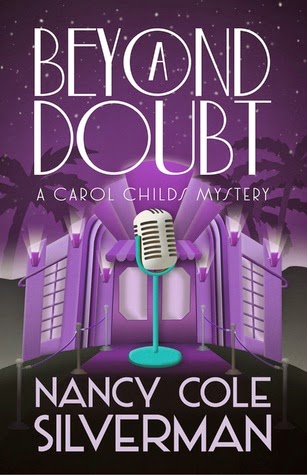 Goodreads synopsis: When Carol Childs is called to the scene of a body dump she has no idea she’s about to uncover a connection to a string of missing girls. Young, attractive women drawn to the glitz and glamor of Hollywood via an internet promise of stardom and romance have been disappearing. A judge’s daughter leaves behind a clue and a trip down Hollywood Boulevard’s Walk of Fame reveals a connection to a high powered real estate mogul and to a cartel targeting girls for human trafficking.
Old Hollywood has its secrets, its impersonators and backdoor entrances to old speakeasies and clubs where only those with the proper credentials can go. And when Carol Childs gets too close, she finds herself politically at odds with powers that threaten to undue her career and like the very girls she’s seeking, disappear.

This book was a real nail-biter! It kept my attention the entire time. I could actually put myself into Carol's place and live in this world for awhile. (I work in the media too, but I work at a newspaper instead of a radio station. Graphic artist, not news reporter.) The drama was heightened when her daughter gets embroiled in the action and that really brings home how important this story is, not only to Carol but to the city of Hollywood in general

Dr. Diamond was definitely M.A.D. in this book. It was creepy how he had everyone snowed. They believed everything he said and he held something over everyone's head in order for them not to talk. He must have been busy keeping all his threats safe. I like how he impersonated a famous actor, he was like Clark Kent changing his glasses and not one knew he was Superman. But instead Diamond had no moustache in real life and wore a moustache for his impersonating. This story is set in Hollywood and impersonators and the Hollywood club scene are featured prominently.

This book felt like it was based in the real world. It showcased human and organ trafficking on the black market while making the story reachable for those of us who think "it could never happen to us."

This is one you definitely need to check out.

I received this ad as an ARC (Advanced Reader Copy) from NetGalley in return for an honest review. I thank NetGalley, the publisher and the author for allowing me to read this title.
Posted by Toni at 12:13 PM No comments: