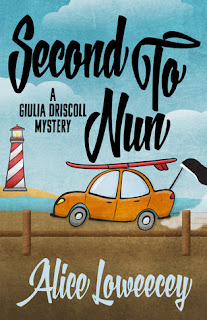 Goodreads synopsis: The Other Side has hired Driscoll Investigations. The owner of Stone’s Throw Lighthouse Bed and Breakfast insists that a Tarot reading told her to hire Giulia to evict the family ghost. Since the ghost is cutting gas lines and flooding cellars, Giulia and her husband Frank head to the B&B to discover the real perpetrator.
The client also has a family legend: A highwayman who stole a pile of gold. Giulia has a pile of suspects, including a psychic the client hired to conduct weekly séances. So much for romance with Frank at this getaway.
Instead, Giulia’s juggling arson, creepy clown dolls, and the psychic going all Exorcist on her. Then the ghost tries to push the client off the lighthouse and throw Giulia down three flights of stairs. It should’ve known better than to mess with an ex-nun. Giulia has connections and she’s about to use them.

Our Nun turned PI has taken on a new case and this time she takes her Detective hubby along with her to solve the mystery of the haunted lighthouse turned bed & breakfast. Due to a tarot reading the owner received, she was prompted to hire the PI and her agency to help bring down the ghost that has been haunting her establishment. Of course, Giulia does  not believe in ghosts and so she believes this haunting is of the very much alive person variety. So she and detective hubby sign into the Lighthouse B&B as a couple just wanting a bit of a vacay.

Hubby has to take a day or two to get his current cases under wraps before he can join Giulia at the B&B so she starts out the book on her own. Which is fine with her because she is good on her own when in investigation mode.

She visits the home office a couple of times in order to find a better wifi signal but later they discover a great hot spot on the beach between a few businesses. She checks out the background of all the guests.

This is when all the good stuff starts to happen, the real haunting juicy things that try to convince Giulia that a real ghost presides there. But she is not deterred. There are many twists and turns that will keep a reader interested all the way to the end of the novel. I really appreciate when the author doesn't take the easy way out. I totally enjoyed reading this book  and would recommend it to anyone. Definitely check this one out, folks. This is book two in a series. Nun too Soon is the title of book one.

I received this as an ARC (Advanced Reader Copy) from Net Galley in return for an honest review. I thank Net Galley, the publisher and the author for allowing me to read this title.
Posted by Toni at 9:29 AM No comments: 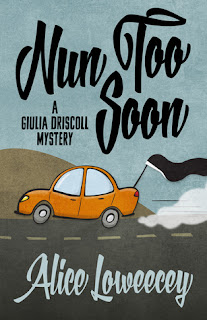 Goodreads synopsis: Giulia Falcone-Driscoll has just taken on her first impossible client: The Silk Tie Killer. He’s hired Driscoll Investigations to prove his innocence and they have only thirteen days to accomplish it. Talk about being tried in the media. Everyone in town is sure Roger Fitch strangled his girlfriend with one of his silk neckties. And then there’s the local TMZ wannabes—The Scoop—stalking Giulia and her client for sleazy sound bites.
On top of all that, her assistant’s first baby is due any second, her scary smart admin still doesn’t relate well to humans, and her police detective husband insists her client is guilty. About this marriage thing—it’s unknown territory, but it sure beats ten years of living with 150 nuns.
Giulia’s ownership of Driscoll Investigations hasn’t changed her passion for justice from her convent years. But the more dirt she digs up, the more she’s worried her efforts will help a murderer escape. As the client accuses DI of dragging its heels on purpose, Giulia thinks The Silk Tie Killer might be choosing one of his ties for her own neck.

Giulia used to be a nun. But now she is a PI. Makes total sense, right? At least for Giulia it does. I would love to have more of the backstory of how Guilia came to give up the convent and how she came to fall in  love with her police detective hubby. But none of that is really covered here. It is alluded to in a vague sense. And everyone seems to know about Giulia's past as a nun and all tend to kid her about it. Not sure how I feel about that aspect. I know it is all in good fun, but sometimes a little respect for someone who made that sort of vow is warranted.

But I digress. This book was really good. It was a good introduction to this series of PI novels featuring ex-nun, Giulia. Most of the appropriate highlights are covered in the Goodreads synopsis. Sydney is on the verge of birth having her own mini-Sydney, Zack is the Admin and he is a bit strange but in the entire scheme of things he didn't seem as strange as the synopsis alluded to. Jane came in to take Sydney's place while on maternity leave and she was hiding her real self. Would have loved to see more of her but she was in and out of the story. A real cool gal who had tattoos but felt like in her her line of work she had to cover them up to get a "real" job. Giulia was very cognisant of Jane's lifestyle choices and treated her with respect and dignity. And this respect made the character bloom. Hope to see more of her in book two which is called Second To Nun.

I gave this book four stars because it was a great intro to the series and it really kept you guessing. Plus, I had bought some natural muscle rub the week before and at the end of the book Sydney had recommended this rub to her boss for a bunch of bruises she acquires at the end of the book. Sydney was a really health conscious person. And when they say that this rub makes bruises go away fast, it is totally true. When you get to that part, write it down. It will be a great thing to put into your first aid kit when chasing the criminal element.

I received this as and ARC (Advanced Reader Copy) in return for an honest review. I thank NetGalley, the publisher, Henery Press and the author for allowing me to read this title.

UPDATE!! Just discovered that there is a three book series (so far) under another publisher, Midnight Ink, and the series is called Falcone Driscoll.
The books are 1) Force of Habit  2) Back In The Habit  3) Veiled Threat
Posted by Toni at 12:04 PM No comments: