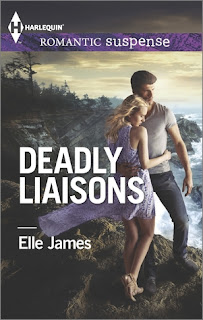 Goodreads synopsis: People have been known to perish at McGregor Manor…
Opening her B and B to a group of ghost hunters, Molly McGregor hopes the spirits rumored to be there will appear. She needs the weekend to be a financial success. But when disembodied voices and hazy images nearly lure her to her death, Molly's driven straight into the arms of a sexy but mysterious guest—Casanova Valdez.
Nova knows what it's like to be haunted—by memories of a case gone bad. As a secret agent, he's confident he can protect Molly but is not exactly sure he believes in ghosts. As the mysterious incidents targeting the gorgeous redhead become increasingly more dangerous, Nova must question if it's the handiwork of a ghost…or a killer

Casanova (Nova for short) and his team celebrate a recent victory at the thought to be haunted Bed & Breakfast of a teammate. A deadly fog comes in called the Devil's Shroud stranding everyone at the B&B but Tazer and Nova decide to take their chances in the weather. It isn't long into their journey before they realize their brakes have been tampered with. The fog was as deadly as the road was treacherous and the two of them barely  got out alive. And so they too are stranded at the hotel at the mercy of the devil's shroud. Nova and Molly were both thinking about each other in that romantic way and decide that a no-strings-attached affair is the ticket for them. After their deadly liaison Molly is pushed down a set of stairs that could have killed her and that is when they realize there is a deadly threat in their midsts.

This book was compelling and it was fun to follow the action and try to figure out which of the guests were behind all the antics. You should definitely check this one out if you love paranormal stuff or enjoy a romantic suspense type of story. 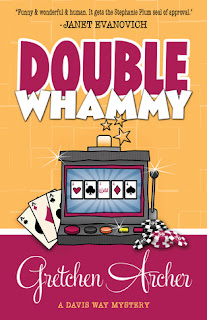 Goodreads Synopsis: Davis Way thinks she’s hit the jackpot when she lands a job as the fifth wheel on an elite security team at the fabulous Bellissimo Resort and Casino in Biloxi, Mississippi. But once there, she runs straight into her ex-ex husband, a rigged slot machine, her evil twin, and a trail of dead bodies. Davis learns the truth and it does not set her free—in fact, it lands her in the pokey.
Buried under a mistaken identity, unable to seek help from her family, her hot streak runs cold until her landlord Bradley Cole steps in. Make that her landlord, lawyer, and love interest. With his help, Davis must win this high stakes game before her luck runs out.
Part of the Henery Press Mystery Series Collection, if you like one, you'll probably like them all! DOUBLE WHAMMY is the first book in the Davis Way humorous mystery series. Bonus: Includes book club discussion questions.

MY TAKE ON THIS TITLE

Davis Way, heroine of this series, has had a heck of a life up until this book starts. She used to be a cop working with her father, Samuel Way, the Police Cheif of Pine Apple, Alabama, but then Eddie entered her life. He was the baddest of bad influences. And for some unknown reason, she ended up marrying him twice. And before it was all over she went a little crazy and tried to kill him. That landed her without a job and a husband.

As fate would have it, Davis ended up at a very strange interview for a job at a casino. It was cryptic and she really didn't know what she was getting herself into but she needed the money. After signing a telephone book's worth of paperwork, she began a job where she had a fab hotel room in the swanky Bellissimo Casino and could play the Double Whammy slots to her heart's content. Her security job was to figure out how someone was stealing the jackpots of these machines at certain intervals. It was when she discovered that her ex-Eddie was involved in this little plot with the Double Whammy machines and everything in her world came to a full stop. And she wanted out of the whole shebang. But she had signed a butt-load of contracts and would have to pay up big time if she didn't stay and make it work for at least 90 days.

It wasn't long after that she came across the info that the owner of the Bellissimo's wife looked exactly like she did and was having an affair with Eddie to boot. Could this be a living nightmare, or what? I don't want to spoil the whole thing for you so I will begin to get a bit vague after this point. My advice, just read it. Read the whole series. I some how ended up reading the entire series of of order. And it is still great stuff.

The book took every crazy turn you can imagine and some you can't. It is one of those books that really keeps you on  your toes and you begin to wonder who is going to survive the fallout.

This book was a quick and easy read. It really flows and you find yourself wondering what in the heck is going on and who is really involved in the shenanigans. Should Davis trust Teeth or No Hair, what about the enigmatic, Natalie?

Some scenes are pretty funny, specially the one where she is breaking into No Hair's office or ordering professional digital printers that end up being the size of a bedroom. I have yet to figure out how her landlord's apartment survived the fallout. You just have to read it to understand what I am talking about.

I bought this book with my own money because it was dang worth it!
Posted by Toni at 10:37 AM No comments: