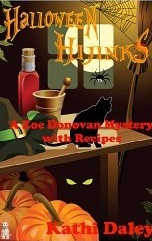 Goodreads synopsis: Amid a backdrop of zombies on the run and Halloween festivities, animal control officer Zoe Donovan is faced with losing something she loves in order to save someone she loves when she finds a dead body in the basement of a haunted house just two days before Halloween. With the help of her best friends, Levi and Ellie, and her dog Charlie, she delves into a mystery as complex and multilayered as the feelings she develops for her ex-nemesis Zak Zimmerman. Halloween Hijinks is the perfect recipe, combining holiday fun with a touch of humor, a pinch of romance, and a dollop of murder

I have to say that I was a bit disappointed in this novel. It took until after halfway through the book before the murder actually happened. If  you are writing a book that is a mystery, you might want to start the mystery part a bit sooner than that. (JMHO as a mystery book reader)

Beyond that the characters were interesting. And I understand that this is the first book in a series and sometimes these aren't the best offerings from the author but they live just to get the series started. I enjoyed Zoe and her job finding all the strays and homeless dogs and cats in the county she lives in.

I thought Zak could prove to be an interesting foil for Zoe but she seemed to come to like him way to fast for my liking. And there is a big build up surrounding Zoe's mother and how she is back in town but no one informed Zoe of this fact. And then nothing really came of it in the end. I thought that to be odd. I also never got a good feel for Zoe's dad and  how he fit into the picture of her life.

I enjoyed the concept of this book but it lacked a bit in follow through. But, I have to say, if you plan to read further into the series, you might want to pick this on up just for the background info on all the characters.

I paid for this book with my own money.
Posted by Toni at 2:53 PM No comments:

No One Lives Twice (Lexi Carmichael Mystery #1) by Julie Moffett 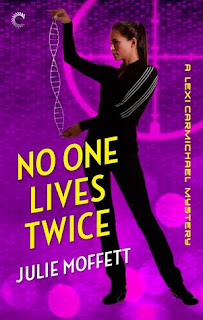 No One Lives Twice (Lexi Carmichael Mystery #1)
by Julie Moffett

Goodreads synopsis: I'm Lexi Carmichael, geek extraordinaire. I spend my days stopping computer hackers at the National Security Agency. My nights? Those I spend avoiding my mother and eating cereal for dinner. Even though I work for a top-secret agency, I've never been in an exciting car chase, sipped a stirred (not shaken) martini, or shot a poison dart from an umbrella.
Until today, that is, when two gun-toting thugs popped up in my life and my best friend disappeared. So, I've enlisted the help of the Zimmerman twins—the reclusive architects of America's most sensitive electronic networks—to help me navigate a bewildering maze of leads to find her.
Along the way, my path collides with a sexy government agent and a rich, handsome lawyer, both of whom seem to have the hots for me. Hacking, espionage, sexy spy-men—it's a geek girl's dream come true. If it weren't for those gun-toting thugs.

Can I just start off by saying that Lexi Carmichael is da bomb! She is my geek idol. I really enjoyed reading the last few books in this series and in my "going back to the beginning" book reading kick, I found this one to be just as mesmerizing.

In this book Lexi still works at the NSA (National Security Agency) and she is drawn into a mystery by her best friend Basia who is a translator. Basia sends Lexi a mysterious package that seems to have everyone's attention but she has no clue about. Lexi enlists the help of the Zimmerman Twins to help her get a message to the elusive Slash who seems to be the government's number one go-to man. Along the way Lexi meets the dashing Irish lawyer, Finn Shaunassay . He is a bit more than than he seems... as is nearly everyone in this book.

If you want to delve into the spy game and have a lot of fun along the way, definitely check out this book! It is the first in a series of novels. Just my piece of cake.

I paid for this book with my own money.
Posted by Toni at 2:36 PM No comments:

New book by Zanna Mackenzie -- Murder on the Menu 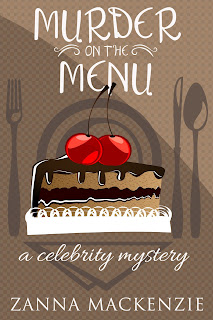 I was asked to review this book, Murder on the Menu, so I thought I would give you all a synopsis and let you check it out for yourselves.

Murder on the Menu by Zanna Mackenzie
Lizzie Carter desperately needed to escape from the disaster of her old life but her new one is shaping up to be even worse! After Lizzie's new boss, celebrity chef Armand, is stabbed in his own kitchen, Lizzie finds herself at the top of the suspect list. Determined to clear her name she’s forced to enlist the services of her new neighbour, Celebrity Crimes Investigation Agency (CCIA) special agent Jack Mathis, who’s been suspended from his duties for reasons unknown. Given his reputation, Lizzie figures it’s best not to ask too many questions of him; she only needs the rogue agent to help her catch Armand’s real killer. The fact that Jack is a good-looking guy is not lost on her, but he’s clearly also trouble. And Lizzie’s got more than enough of that in her life already. Can Lizzie save herself from getting arrested and manage to resist her special agent sidekick’s considerable charms and gorgeous smile? Will they solve the culinary murder mystery or will her new life land her in a prison cell?
Get the book on Amazon:
http://getbook.at/MurderOnTheMenu 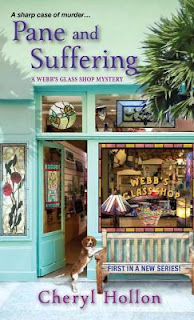 Goodreads synopsis: To solve her father's murder and save the family-owned glass shop, Savannah Webb must shatter a killer's carefully constructed façade. . .
After Savannah's father dies unexpectedly of a heart attack, she drops everything to return home to St. Petersburg, Florida, to settle his affairs--including the fate of the beloved, family-owned glass shop. Savannah intends to hand over ownership to her father's trusted assistant and fellow glass expert, Hugh Trevor, but soon discovers the master craftsman also dead of an apparent heart attack.
As if the coincidence of the two deaths wasn't suspicious enough, Savannah discovers a note her father left for her in his shop, warning her that she is in danger. With the local police unconvinced, it's up to Savannah to piece together the encoded clues left behind by her father. And when her father's apprentice is accused of the murders, Savannah is more desperate than ever to crack the case before the killer seizes a window of opportunity to cut her out of the picture.

I totally enjoyed this glimpse of the inner workings of a glass artist's world. My great uncle does stained glass and through this book I can see what a great art it is and how intricate and detailed you have to get to make it look so wonderful.

Savannah "don't call her Vanna" Web has been called back to St. Petersburg, Florida because of her father's untimely death. It is labeled as a heart attack, but Savannah begins to question everything when her father's best friend, Hugh, also dies within weeks of her father. Something sinister is going on here and it takes Savannah quite a while to get the police to take her suspicions seriously. Her father used to be a code breaker for the government in his younger years, as did Hugh. So, when she finds a coded message from her father telling her he was murdered, she knows she must act.

While searching for the answers to her father and Hugh's death she is trying to figure out what to do with her father's glass shop. She has to take over all the classes her father had been teaching and meets the pub owner next door, a nice British guy. And two different men keep coming around wanting to purchase Webb's for well under the normal asking price. Savannah is perplexed. Should she stay and run Webb's or sell and go back to her life in Seattle.

I really enjoyed reading this cozy mystery adventure and recommend it highly for anyone who likes this type of mystery. It is definitely worth the read.

I received this as an ARC (Advanced Reader Copy) from Net Galley in return for an honest review. I thank Net Galley, the publisher and the author for letting me read this great book.
Posted by Toni at 11:41 AM No comments: 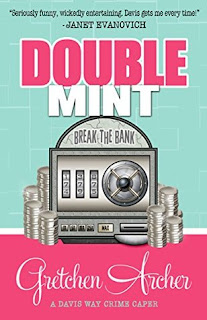 Goodreads synopsis: It’s convention season at the Bellissimo Resort and Casino and Davis Way Cole barely notices. It’s hard to pay attention when you live in a Jambalaya Junkyard. But when Special Events Coordinator Holder Darby walks off the job just as five hundred Alabama bankers pour in the front door, Davis steps up.
Or would that be in? Definitely in. Davis steps in.
It.
Not only has the convention director vanished, but a certain Bellissimo guest is missing. One who forgot to pack the million dollars he left in the bathtub. It looks like our redhead newlywed Super Secret Spy’s lazy summer is over when the Bellissimo vault is robbed. Can Davis connect the dots before it’s too late? Can she get her Taser gun back from Bianca Sanders? Will she be stuck with Eddie Crawford’s 1962 Cadillac forever? What Davis needs is a little faith. And a lot of luck.
New money. Old sins. Back to jail. And a cat.
(A cat?)
Break the Bank

Davis Way is back! I just love her. She cracks me up. Davis looks exactly like the owner of the casino's wife (but the wife is ten years older). Casino wifey is on an exercise kick and wants Davis to buff up a bit (okay, a lot). And when she isn't getting the third degree from Bianca, she is trying to convince everyone that Magnolia has something to do with all this bathtub of cash that is all funny money. But no one is listening to her. No one wants to believe the impossible.... no one except Davis Way. And Davis goes to the ends of the earth to prove herself right... okay, she went all the way to New Orleans. Same difference.

This is the fourth book in the Davis Way Crime Caper series and it is definitely a hoot just like the rest of them. I don't want to give too much away because uncovering all the clues is the fun part of reading a book like this. I extremely enjoyed this title. It was fun, refreshing and, like I said, a definite hoot and a half. If you love yourself a little cozy mystery or a crime caper, this book is for you.

I received this book as an ARC (Advanced Reader Copy) from Net Galley in return for an honest review. I thank Net Galley, the publisher and the author for allowing me to read this title.
Posted by Toni at 11:50 AM No comments: