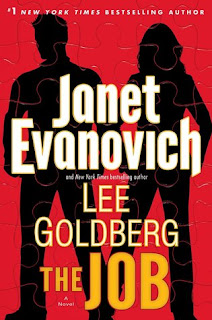 Goodreads synopsis: Charming con man Nicolas Fox and dedicated FBI agent Kate O'Hare secretly take down world’s most-wanted and untouchable felons, next job Violante, the brutal leader of a global drug-smuggling empire. The FBI doesn’t know what he looks like, where he is, or how to find him, but Nick knows his tastes in gourmet chocolate.

From Nashville to Lisbon back alleys, from Istanbul rooftops to Thames, they chase clues to lookalike thefts. Pitted against a psychopathic bodyguard Reyna holding Kate hostage and a Portuguese enforcer getting advice from an ancestor's pickled head, they again call driver Willie for ship, actor Boyd for one-eyed Captain Bridger, special effects carpenter Tom, her father Jake - retired Special Forces, and his talent - machete-wielding Somali pirate Billy Dee. This could be their biggest job - if they survive.

4 Stars
(but should have rated it 3.5 but there isn't an option for a decimal point in ratings)

I pulled my normal reading a series out of order tactic. I find this makes it easier to see how someone who would just pick this book up randomly would react. My take is that the book seemed really cheesy in the beginning. I couldn't get myself to take any of it seriously. For instance, what thief would use very recognizable character names as an alias? I could see if it were from series that weren't that well-known but going into a situation and saying you are Jean-Luc Picard, now that is just asking to be found out as a liar.

The character interaction was weird. Kate was supposed to be all bad-ass but she didn't seem to be based on the characterization. The only thing that gave her a bit of an edge was her use of the baton in iffy situations. Nick's character was rather unbelievable too. He was supposed to be this suave gentleman thief that never lost his cool but I wasn't buying it. None of it rang true for me. I just kept thinking that the Stephanie Plum novels are a lot more well-written than this.

The book did get better as it got into the main thrust of the story but I just felt like I was wading through it hoping to get to the end. Don't get me wrong, I am not an action and thriller hater. This is my type of story. I love this genre. And it was just not a fun read for me.

I did find Nick's ingenious way of getting out of his last predicament very clever and when the "dream team" came together to set up the con job, that was cool too. There were good bits and not so good bits. So that is why I gave it a 3.5 out of 5 stars.

If you love the spy genre or shows like White Collar, then this would be right up your alley. Check it out.

I received this as an ARC (Advanced Reader Copy) from Net Galley in return for an honest review. I thank Net Galley, the author and the publisher for allowing me to read this title.
Posted by Toni at 8:24 AM No comments: 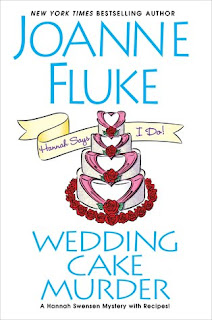 Goodreads synopsis: Everyone in Lake Eden, Minnesota, may have had their doubts, but at long last, Hannah Swensen is getting married!
Hannah is thrilled to be marrying Ross Barton, her college crush. And her excitement only grows when she learns he’ll be able to join her on her trip to New York City for the Food Channel’s dessert chef contest. She’s especially nervous about facing Alain Duquesne, a celebrity chef with a nasty reputation. But before he can tear into Hannah’s layer cake, she finds him stabbed to death on the show’s kitchen set. Out of the oven, as the saying goes, and into the bright lights of Broadway, as Hannah tries to solve a mystery with more layers than a five-tiered wedding cake

I felt a little let down and disappointed by this book. Don't get me wrong. I love this world. The Cookie Jar and the residents of Lake Eden are my jam. But I expected more.

I felt like Hannah's choice of Ross over Mike or Norman was the chicken's way out. (I know that choice happened in the previous book but it does effect this book.) We, the audience, have become so invested in these two men that Hannah not choosing either of them was like a slap in the face of the reader. It was just unthinkable. I felt slighted. I think I have always leaned toward Team Mike more than Team Norman but Team Ross just wasn't on the scoreboard for me. So the idea of Hannah getting married was just meh. I wasn't interested in these festivities. Ross just seemed so non-chalent about the wedding I wondered if he even wanted it to occur.

I may have been influenced to not liking the wedding due to the groom alone. All the wedding festivities felt dull and almost like an after thought. The Food Network contest was the true gem and focus of this piece. The characterization of the head judge was excellent. I was loving to hate him. What a schmuck!

I was so mad at Hannah's mom in the beginning for the underhanded way she forced Hannah into having a big wedding that I wrote a whole blog about that small fact. It really bothered me. Bad you, Delores!

Here is a link to that blog post if you are interested in reading about my rant: http://beautysleuthbookdiva.blogspot.com/2016/02/reader-reflections-wedding-cake-murder.html

I loved how Michelle has become such an integral character in the last few books. But in this tome, where was Mike, Lisa and Norman. I totally missed them. They had tiny bit parts here, barely background characters. It is my feeling when you have this trio front and center, Hannah really shines. I hope to see more of them in future books.

The recipes that were sprinkled through out the book in the past have seemed to just flow with the text, but this time felt like product placements. It was as if the author said, I need so many recipes and I will put them here, here and here, and now I have to write something awkward in the text about them to make that recipe appear to make sense in the paragraph. It was annoying me. I never really noticed it before but it really stood out in this book.

Since I am not a Ross fan I kept finding myself hoping that he would turn out to be the killer and then my Team Mike/Team Norman rivalry would live on. Near the end, Hannah says how Ross loves his red wine and I was like "EUREKA! He did it!" and I speedily read to see if I was right! But I once again did not discover the true killer and the motive eluded me. Many of the true clues about who the killer turned out to be was kept under wraps and not revealed to the reader making it harder for us to figure out whodunit.

All in all, the book had good bones but lacked a bit on follow through. I hope the next book offers more for us readers to dig our teeth into.

I received this book as an ARC (Advanced Reader Copy) from NetGalley in return for an honest review. I thank the publisher, the author and NetGalley for allowing me to read this title.