BOOK REVIEW: Murder at the Bake Off by Zanna Mackenzie 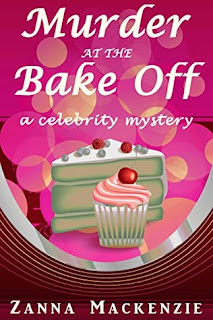 Goodreads synopsis: A romantic comedy baking celebrity mystery...
Lizzie Carter would love nothing more than to enter and win the Grand Bake-Off competition at this year’s Delamere Baking Festival, setting her on the way towards fulfilling her secret and special quest, but there’s just one problem—she’s a mediocre baker at best.
If that wasn’t enough of a challenge, this year’s celebrity judge, Cherry Bakewell, is found dead with a poisoned cupcake in her hand before the festival even kicks off. Even worse, Lizzie’s fiancé Jack, a private investigator and appointed security consultant for the festival, was the one who found Cherry dead, and the police are treating him as a suspect.
As if her life wasn’t crazy enough before, juggling two jobs and organising her wedding, now Lizzie, determined to clear Jack’s name, has to add tracking down a murderer to her To-Do list, as well.
Will the police haul Jack in for further questioning, leaving Lizzie to tackle the case all on her own? Can she hunt down the real murderer before they strike again? Should Lizzie just ditch her ridiculous baking dreams right now before her dreadful cakes become the laughing stock of the festival?

Lizzie Carter dreams one day of being a good cook and baking her and Jack's wedding cake. But first she needs to do one important thing... learn how to cook. The Delamere Baking Festival Grand Bake-off has Lizzie wondering if she was up to such a challenge. Jack Mathis ends up getting the job as security for the bake-off but when he ends up finding the dead body of famous celebrity baker Cherry Bakewell, he becomes suspect number one.

Lizzie ends up juggling two jobs and now wants to help clear Jack's name on top of her growing stack of things to do. Her to-do list is getting longer and longer by the minute.

I thought this was a good representation of what Zanna Mackenzie does best, plotting out a great story. It kept me interested throughout even though I did not have a lot of time to devote to reading it due to my busy schedule. Thank goodness for lunch time cram sessions to get my Zanna Mackenzie fix.

The first book in the celebrity crimes mystery series featured a lot more of her fiancee Jack Mathis and I think I would have liked to see a bit more of him in this book. Due to the fact that he was the main suspect, he wasn't actually on the canvas of the novel as much and did a lot of things "off camera.

If you love a good cozy mystery, you won't be disappointed in Zanna Mackenzie's Celebrity Mystery series. Also check out her wildly popular Amber Reed Celebrity Crimes mysteries as well.

I received this book as an ARC (Advanced Reader Copy) from the author and I thank her for allowing me to read this novel in return for an honest review.
Posted by Toni at 9:37 AM 1 comment: 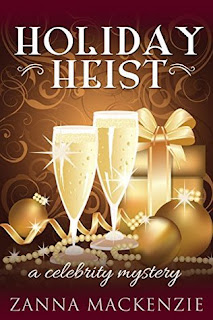 Goodreads synopsis: It’s Christmas Eve and Lizzie Carter’s been engaged for the grand total of one hour when her private investigator fiancé Jack announces he has a confession to make - their holiday season plans need to be put on hold so that Jack can take on a new case!

A priceless necklace has been stolen from the hotel bedroom of a movie star actress and the woman in question insists Jack’s the man to track it down and bring it back safely.

Lizzie decides to turn amateur sleuth and tag along to help Jack out – two heads have got to be better than one, right? Plus, she can’t miss out on a chance to get inside the fabulously exclusive Roseby Hotel and admire their amazing festive decorations.

Can they solve the mystery, catch the thief who masterminded the holiday heist, return the necklace to its rightful owner, and still get to celebrate Christmas Day as planned?

Holiday Heist is a 15,000 word festive novella, PLUS an extract from Murder On The Menu, another Celebrity Mystery adventure with Lizzie and Jack.

Jack Mathis, former celebrity crimes investigation agent, has decided to hang his shingle out as an independent contractor. And due to his former line of work, he knows a lot of big wigs in the Hollywood crown. So, it could come as no surprise when Actress Arabella Saunders wants Jack to find her priceless necklace, an irreplaceable family heirloom. Main character Lizzie Carter, of course, is starstruck and wants to be a part of the investigation.

I thought this novella had some good bones and a great twist but I think it could have used a bit of bulking up. Things were resolved a bit too quickly for my taste. But all in all Zanna Mackenzie gave us a choice piece to add to our digital library. Definitely check this one out if you are looking for a quick read.