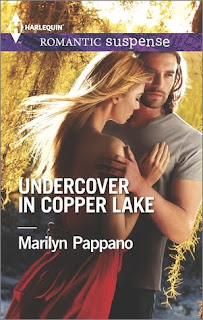 Goodreads synopsis:
A past he'd rather forget, a future he secretly longs for…
DEA informant Sean Holigan never imagined he'd return to Copper Lake and revisit the ghosts of his past. But bad memories aren't the only thing waiting for him. With their mother in jail, Sean's nieces are in the care of their foster mother, Sophy Marchand. Years and miles haven't erased Sean's high school memories of the young, studious Sophy, but she certainly has grown up. Beautiful and benevolent, Sophy represents a life, and love, Sean longs for—and one of three lives he must protect. Targeted by ruthless killers, Sophy and the girls depend on Sean…almost as badly as he depends on them.

I  struggled to finish this book. I did not find the flow of the text while reading it and it just fell flat for me. As the last third of the book approached, the writer found her groove and that part was so much better than the first two-thirds.

The whole situation surrounding Sean’s past wasn’t quite understandable in the beginning. If it had been more clear, I think I would had an easier time reading this book. Sean’s whole backstory was only revealed near the end. I could not quite figure out why the DEA was so interested in having him come back to his hometown to force his sister to reveal her part in a drug operation that somehow concerned Sean’s boss.

I have a hard time believing Sean wouldn’t have seen through his boss’s false familiarity. The characters were strong and I identified with them during the story but the story itself is what fell flat for me, sorry to say.

Only pick this one up if you are a true Marilyn Pappano fan.

I bought this book with my own money.
Posted by Toni at 2:17 PM No comments:

BOOK REVIEW: Your Mind is What Your Brain Does for a Living by Steven Jay Fogel / Mark Rosin 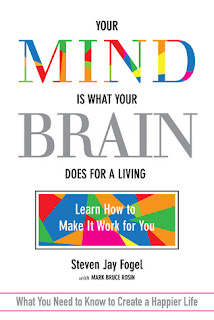 Your Mind Is What Your Brain Does for a Living: Learn How to Make It Work for You
by Steven Jay Fogel (Goodreads Author), Mark Rosin
Paperback, 288 pages
Published March 11th 2014 by Greenleaf Book Group Press (first published March 6th 2014)

Goodreads synopsis:
Your default programming—the automatic choices all of us make in life without even noticing—can sabotage you, but you can learn to interrupt your self-defeating behavior and make better choices. Steven J. Fogel shares what scientists have discovered about your ability to “rewire” your brain to act in ways that will make you happier and offers sage advice about how to resolve long-term dysfunctional relationships that are causing you stress, frustration, and pain. Put the past where it belongs—in the past. Be mindful, live in the present, and lead a fulfilling life full of possibilities!

My thoughts: 4 Stars
This is one of those books that you need to read once and then go back and employ all the different exercises. I think that adding a journal with this book would be key. There are a ton of great insights here. It is like a guidebook to life and how to get more out of it. I came away understanding so much more than I thought I would.

My favorite part was about how we can be a frog in hot water. I know that really applied to me personally. I would recommend this to anyone who is interested in learning more about  how our brains work for and against us. Definitely a powerhouse book. Check this one out.

I received this as an ARC (Advanced Reader Copy) from NetGalley in return for an honest review. I thank NetGalley, the publisher and the author for allowing me to read this title.
Posted by Toni at 11:43 AM No comments: 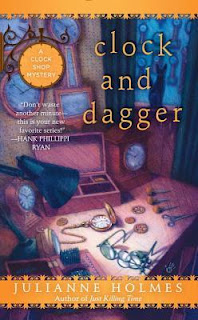 Goodreads synopsis:
Ruth has three days to pull off four events—including the grand reopening of Cog & Sprocket, the clock shop she inherited from her grandfather—so she doesn’t have time for Beckett Green’s nonsense. The competitive owner of a new bookstore, Green seems determined to put other businesses out of business by also carrying their specialty items. He’s trying to steal Ruth’s new watchmaker, Mark Pine, not to mention block her plans to renovate the town clock tower.

Ruth is already all wound up when she’s alarmed to discover Mark’s dead body. As the denizens of Orchard each chime in as to who they think the murderer is, Ruth needs to watch her back as she investigates on her own. Despite the danger, Ruth won’t stop until the killer is behind bars and serving time.

My thoughts: 4.5 Stars
Ruth Clagan is a horologist. Horology is by definition the art or science of measuring time. This makes Ruth somewhat of an expert at clock and watch repair. So, it is no accident that she takes over the shoppe called the Cog & Sprocket for her late grandfather, GT.  Ruth has decided that one of her missions is to refurbish the old clock tower but she is being blocked right and left by a lady on the city board. When the residents are getting ready for a downtown party which includes the reopening of the Cog & Sprocket, one of Ruth’s assistants is found dead with a strange watch located nearby.

I like how the town Sheriff unknowingly becomes somewhat of a foil for Ruth’s budding relationship with shop owner, Ben. I enjoyed all the twists and turns which I won’t get into here because that will just ruin the fun for the rest of you.

Ruth just can’t help but stick her nose into the investigation and ends up helping the Sheriff locate an old conspiracy that was kept hush hush by people close to Ruth.

This was an enjoyable mystery and even though it took me awhile to read it, that had nothing to do with the greatness of the book. That was only due to the business of my schedule. Definitely check this one out. It is the second book in the Clock Shop Mystery series. I am looking forward to checking out book one entitled: Just Killing Time.

I received this as an ARC (Advanced Reader Copy) from NetGalley in return for an honest review. I thank NetGalley, the publisher and the author for allowing me to read this title.