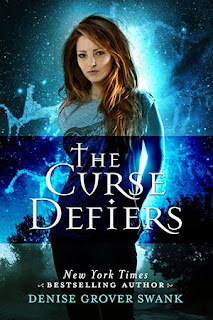 Goodreads synopsis:
For centuries the gods have waited—for the betrayal that will release them, for the traitors who will defend them, for the warrior who will challenge them. Now at long last the gate between the human and spirit worlds is open, and with it, an army of vengeful demons poised to swarm the earth. Only the Curse Keepers, Ellie Lancaster and Collin Dailey, can stop it…if they can break free from a tangled web of treachery, jealousy, and lies.

Torn between two men—her heart belongs to David, yet her soul is bound to Collin’s—Ellie no longer knows who she can trust. Demons slipping through the gate are leaving a trail of bodies in their wake, each death a chilling reminder of the power of the ancient spirits to bring humanity to its knees. Faced with an unimaginable future, Ellie realizes the time has come to turn her back on prophecy and choose her own destiny—even if it means defying the gods themselves.

This final installment of the Curse Keepers series did not disappointment. I found this series well thought out and filled with so much research that it boggles the mind. But all that research paid off because it made the plot so plausible, realistic and believable.

The backstory of the main character’s parents came to light in this book revealing just how long this curse  keeper tradition has  been in place.

The crux of this story revealed around Ellie and David and their relationship. I was kind of happy the appearances of Collin were few and far between. I was Team David. This roller coaster ride kept us not only entertained but answered many off the questions posed in book one. A lot of series disappoint and leave you hanging, this totally did not do that. All questions were answered in some way.

In the middle of the book Ellie discovered where her true power came from and found out she was more powerful than she even realized. The ending was left open when makes me think there could be other books in the future for this book series.But this book was touted as the finale.

If you love supernatural, fantasy and sci-fi, you will definitely love this. It is unputdownable.

I received this as an ARC (Advanced Reader Copy) from NetGalley in return for an honest review. I thank NetGally, the publisher and the author for allowing me to read this title.
Posted by Toni at 2:42 PM