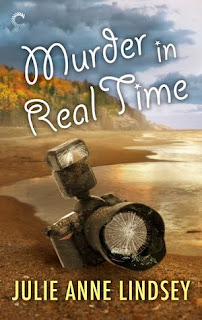 Goodreads synopsis: With the chaos of summer tourists and fall birders out of town, counselor Patience Price is looking forward to the quiet life she remembers. She longs for some peace. And an apple fritter. But the calm is cut short when a reality show sets up camp to film a special about ghosts on her little island. Now fans, reporters and crew have flocked to sleepy Chincoteague. Who knew ghost hunters had an entourage?

When two cast members are killed in a room at the local B&B—a room usually occupied by Patience's FBI agent boyfriend, Sebastian—she finds herself on the case. Sebastian doesn't want Patience ruffling any feathers but, as always, she can't help herself.
Patience promises to let Sebastian handle the investigation—he is FBI, after all—but after a drive-by shooting, her wicked curiosity gets the best of her. And with the TV show forging ahead with filming, the list of suspects (and the line of food trucks) only grows. But has the shooter already flown the coop? And how do you find a killer when you don't know who the target is?

This is book three in a series and I am not sure how I always manage to read these things out of order, but I do.

I was excited to realize that this was by the same author who wrote the Geek Girl’s Guide to Murder series which I really loved. I can see a bit of a correlation between the two series based on how the author built the world. Same family dynamics. I love the whole new age parents aspect. But do not be dismayed each series does stand on its own. It is easy to distinguish one series from another.

Right out of the gate, dead bodies show up in her main beau’s bed. Sebastian Clark is an FBI superstar and he knows all the protocols on how to deal with such disturbances. Thank goodness for guys with special talents, right?

The bodies were of two popular reality television stars. I am not exactly sure how they ended up in the FBI guy’s bed. The house they were renting out belonged to Patience’s other friend, Adrian. The explanation of that aspect did seem a bit convoluted to me but that aspect is completely revealed at the end of the book.

Patience used to be in the human resources department at the FBI but somehow got fired or let go from her position. (Not sure why considering she is such a good worker.) Now she is a counselor working with many people in down. But the funny thing is, they don’t want to meet her in an office. They want their sessions while they are golfing, grocery shopping or just living their every day lives.

Patience spends most of the novel helping her best friend, Adrian run for mayor of their small town. But the appearance of The Watchers reality television series puts the whole city on the map when floods of tourists come to town.

This was a great book. It really kept my interest and I went out and purchased books one and two right away. I love me some Julie Ann Lindsey!

I received this as an ARC (Advanced Reader Copy) from NetGalley in return for an honest review. I thank the publisher, the author and NetGalley for allowing me to read this title.
Posted by Toni at 12:47 PM No comments: 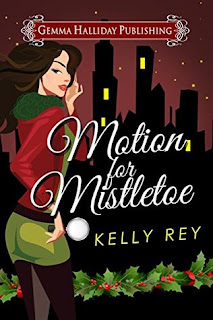 Goodreads synopsis:
When Jamie Winters' elderly neighbor Jack disappears a week before Christmas, Jamie pairs up with her landlord's fearless teenaged niece to find him. Only the more they look into his disappearance, the more they begin to believe Jack is not the man they thought he was...and he bears a suspiciously striking resemblance to jolly old Santa Claus. One carjacking, some spooky reindeer, a little person, and a skinny green man later, Jamie winds up getting way more than she bargained for this holiday season!

This novella takes place between book 1 and book 2. Their neighbor Jack has disappeared right before Christmas. And this neighbor has a penchant for dressing strangely akin to Santa Claus. So when her landlord’s niece spies the abandoned car of Jack, the search is on!

This book is only 70 pages but it feels like you get a lot of bang for your buck here. There is no sweeping stuff under the rug just to get the story complete. All characters are well defined and more fleshed out even from book 1.

This is a gem of a novella. Check it out.

I paid for this book with my own money.
Posted by Toni at 2:19 PM No comments: 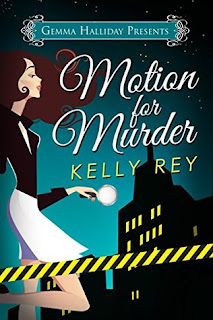 Goodreads synopsis:
Jamie Winters loathes her job as a secretary in the sleaziest law firm in New Jersey. Trouble is, someone else loathes the whole firm—enough to kill one of the partners, the two-timing, eleven-fingered king of lowbrow television commercial spots, Dougie Digits. Now, Jamie is being strong-armed into investigating by Dougie's frosty widow, Hilary. The suspect list is long, including the firm's bookish paralegal, embezzling bookkeeper, ambitious associate, and resentful senior partners. Add to that list a mélange of oddball clients with grudges of their own, and Jamie has her work cut out for her. With assists from her studly landlord and husband-hungry sister, Jamie uncovers enough dirt on her coworkers to launch a tabloid in her hunt to find the killer...before he or she strikes again!

This book took a bit to get into. I think that happens with a lot of novels that are the first in a series. Once I got the gist of who was who, I enjoyed the story more.

I felt for the main character who was in a job that wasn't quite a fit for her but she stayed out of the security of it all. Then when the creepy, overbearing wife of the victim asks her to solve the murder... how can she say no?

I thought the plot was interesting and it kept me guessing. It also gave me a bit of stress when  Jamie was plodding through her suspect list while trying to keep it all on the DL.

I definitely had a hankering to keep up with the series and bought a few more books in this series line. Check it out.

I paid for this book with my own money.
Posted by Toni at 2:13 PM No comments:

BOOK REVIEW: Mystery at the Manor (Cherringham #2) by Matthew Costello 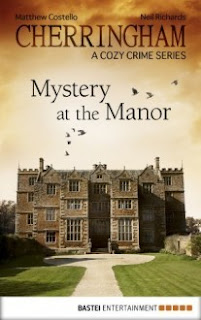 Goodreads synopsis:
The elderly owner of Mogdon Manor, Victor Hamblyn, dies in a mysterious fire. But was it really an accident? Jack and Sarah are skeptical - The victim's three middle-aged children, who all live in the village of Cherringham, are possible heirs. And possible murderers - Did one of them set the fire?

Jack Brennan and Sarah Edwards are back for book two in this captivating series. Jack is former NYPD and Sarah is a web designer. Somehow they keep stumbling across murder in their little hamlet in England.

I find this series intriguing because it is unconventional. The text flows well and the characters are spot on and we really come to care about them. That is a mark of a great writer. It doesn’t matter that this book is not very long. You come away with a great satisfaction when reading it that you have consumed a full length novel.

I find myself looking forward to when the body is discovered and who will have to convince whom to take this murder seriously.

Just a great read. I definitely recommend it highly.

I paid for this book with my own money.
Posted by Toni at 10:13 AM No comments: