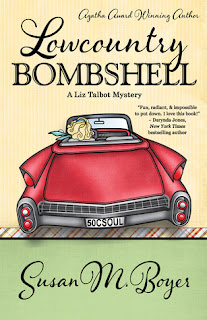 Goodreads synopsis:
Private Investigator Liz Talbot thinks she’s seen another ghost when she meets Calista McQueen. She’s the spitting image of Marilyn Monroe. Born precisely fifty years after the ill-fated star, Calista’s life has eerily mirrored the late starlet’s—and she fears the looming anniversary of Marilyn’s death will also be hers.
Before Liz can open a case file, Calista’s life coach is executed. Suspicious characters swarm around Calista like mosquitoes on a sultry lowcountry evening: her certifiable mother, a fake aunt, her control-freak psychoanalyst, a private yoga instructor, her peculiar housekeeper, and an obsessed ex-husband. Liz digs in to find a motive for murder, but she’s besieged with distractions. Her ex has marriage and babies on his mind. Her too-sexy partner engages in a campaign of repeat seduction. Mamma needs help with Daddy’s devotion to bad habits. And a gang of wild hogs is running loose on Stella Maris.
With the heat index approaching triple digits, Liz races to uncover a diabolical murder plot in time to save not only Calista’s life, but also her own.

This is the second book in the Liz Talbot Mysteries series.

Liz meets Calista who is the spitting image of Marilyn Monroe. But not just in looks, her life mirrors it as well. The people in her life seem to be using this tiny blonde beauty for their own ends. Calista turns to a life coach to assist her in taking control of her life and the life coach ends up dead. Calista asks Liz to help her and so Liz gets immersed into the mystery of Calista’s life.

There are many avenues for Liz to investigate but she is stymied by all her own issues. Her ex has returned and wants a renewed relationship with her. She is confused because it just came out of the blue. Then her partner in her business is being more friendly than usual. What is a gal to do?

This story really keeps you engaged and trying to uncover the mystery of the killer as well as rooting for your favorite love interest for Liz.

Definitely a great story. I got interested in this book after reading the Country Club Murder series. They just seemed to go together.

I bought this book with my own money.
Posted by Toni at 7:58 AM