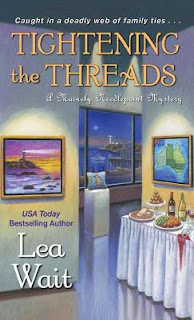 Goodreads synopsis:
In the coastal town of Haven Harbor, blood runs thicker than water--and just as freely . . .
Antique dealer Sarah Byrne has never unspooled the truth about her past to anyone--not even friend and fellow Mainely Needlepointer Angie Curtis. But the enigmatic Aussie finally has the one thing she's searched for all her life--family. And now she and long-lost half-brother, Ted Lawrence, a wealthy old artist and gallery owner in town, are ready to reveal their secret connection . . .
Ted's adult children are suspicious of their newfound aunt Sarah--especially after Ted, in declining health, announces plans to leave her his museum-worthy heirloom paintings. So when Ted is poisoned to death during a lobster bake, everyone assumes she's guilty. If Sarah and Angie can't track down the real murderer in time, Sarah's bound to learn how delicate--and deadly--family dynamics can truly be . . .

This book is about Angie Curtis who runs Mainely Needlepoint in the state of Maine. When she is not learning to needlepoint she is investigating the random deaths that seem to occur with regularity in her small town of Haven Harbor.

The book begins with her good friend, Sarah who runs the antique business in town revealing that she is the long lost relative of the Lawrence family. Ted Lawrence’s father was a big deal in the art world and his paintings are uber expensive. So, needless to say, the Lawrences are really rich. Sarah has taken a DNA test to prove she is related and Ted, who is coming up on his 75th birthday. Ted has invited his children to his 75th birthday party. Mostly he wants to tell them about how he has level 4 cancer but also to introduce them to his new-found relative.

Sarah helps Ted put together his party and has Angie, Patrick West, and Justin, Ted’s assistant at the gallery to help her. The children treat the outsiders like hired help which doesn’t sit right with any of them. Then Ted drops his bombshell. He is changing his will and giving all the expensive Lawrence paintings to Sarah. The children were not happy by this revelation. They were expecting to get the money they had been denied in the past.

During one of the birthday outings, a lobster bake, Ted ends up in the hospital due to a bad crab shell with Red Tide. Then it is revealed that he may have been murdered.

This book really keeps you engaged in the action but the investigation part seemed much shorter then in previous books. I enjoy following Angie and her investigations. I hope to see more of her Mainely Needlepoint co-horts with bigger roles in future books.

If you are a cozy fan as well as a crafter of any type, I am sure you would love this book. Definitely check it out.