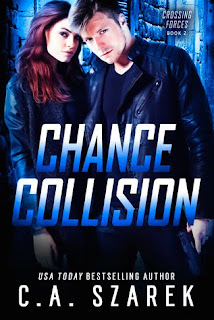 Goodreads synopsis: Vowing to protect her has nothing to do with feelings.
Detective Pete Crane catches a new shooting case and considers it business-as-usual. But when the lead witness is the Chief of Police’s fiery assistant, he never anticipated she’d challenge him—personally and professionally.
Little do they know, the shooting she and her grandmother witnessed was anything but random.
Thrown together, their attraction sizzles, even though she’s squarely in the hands-off zone. She makes him break every rule in his little black book.
Nikki Harper has been attracted to Pete since they met two years ago. Witnessing a brutal shooting throws her into a stigma that’s always been her greatest fear: a victim. She has no choice but to accept his protective custody and let him help save her and her beloved grandmother.
Can Pete protect his witness and solve the case, while fighting the intense heat with Nikki?

This is book two in the Crossing Forces series. This book features Pete Crane and Nikki Harper.

While this book was more interesting in the area of the main characters interactions, I don’t think it lived up to the first book in the series

My overall impression was that it was not really my cup of tea. I enjoyed the overall storyline but the amount of descriptive sex is just way too much for me. (I had the same problem with book one so I guess I shouldn’t have been surprised. But I wanted to know Pete’s story and how it played out.) I did a lot of skimming and I felt like I couldn’t connect with over a third of the book due to that fact. Some people may be all into this type of book but it was just not for me.

The main characters spent a ton of times thinking in their own heads while others did what seemed to me out of character things. I was underwhelmed with the bad guys. They sort of felt like generic bad guy one and generic bad guy two.

I think I have had my fill with this series and don’t plan on reading more. I am sure this is all me and my preferences in reading material. I am all into cozy mysteries where they focus on the storyline and the whodunit aspect of the plot. Making the sex the main thru-line just wasn’t for me. Other people may think this is great stuff and a guilty pleasure. Just not me at this time. I wish the author much success in the future.

If you like a lot of erotica in your romantic suspense, then this book will be for you. But if you are more about the mystery, you might want to take a pass on this.

I received this book (as an ARC - Advanced Reader cCopy) from the author in return for an honest review. I thank the author for allowing me to read this book and wish her many successes in the future.
Posted by Toni at 9:24 AM No comments:

Review of Collision Force by C.A.Szarek 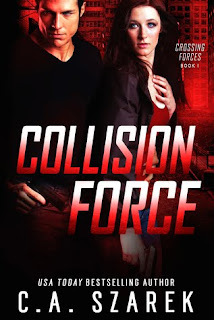 by C.A. Szarek (Goodreads Author)
ebook, 209 pages
Published January 1st 2018
Goodreads synopsis: Bad boy FBI agent and feisty widowed police detective collide pursuing a human trafficker in small town Texas on their way to true love.   Badboy, married to his job FBI agent Cole Lucas always gets his man. So when the unthinkable happens and one gets away, Cole grits his teeth and hunts human trafficker Carlo Maldonado all the way to Antioch, Texas, where he collides with Detective Andi MacLaren.   Cole doesn’t do small towns and doesn’t get involved with women he works with, but Andi tempts him in ways he doesn’t want to acknowledge.   Two murders, her partner shot and leading the investigation on her own, the last thing Andi needs a cocky FBI agent that sees her as no more than a tag-along.   Widow and single mother Andi is used to being on her own. When Cole gets stuck without a place to stay, crashing on her couch puts them in dangerous territory.Attraction and passion bring Andi to a place she’d left behind when her husband died. Her three-year-old son quickly wiggles his way into Cole’s heart, and he starts contemplating things—family, love—that he’d never planned for himself.   Can being forced to work together make them stronger or will their differences jeopardize their case and their hearts?

First off, did I enjoy this book? Yes. It was a good solid read. A 3.5 star read for me. But since Amazon and Goodreads have a 5 star scale, I gave it a four. This is mostly due to personal reasons.

I had planned to have this read by the beginning of the year, but the awkwardness I mentioned above and actually loathing the main character guy, Cole Lucas, made me not want to continue reading. But enough of my excuses.

The plot is solid and easy to follow. The bad guy was the other brother in Dumber and Dumber and I couldn't fathom how he kept getting away from our heroes  The sex scenes are closer to erotica and if that is your cup of tea, great. If not, skim man, skim. You will still get enjoyment out of the read.

I would have liked the plot to be more complex, the sex scenes left to the imagination and a bad guy worthy of the protagonists. But like I said, I have my own preferences. I am sure you do too.

I felt bad for Pete, Andi's partner. He obviously held a torch for her but she was too devastated by her husband's death to even notice. (it's okay though because book two in this series features Pete called Chance Collision.

This is the first book in a series of romantic suspense titles so it had a second job of introducing us to a plethora of characters we might meet in future books.

Would I recommend this book? Sure. It is good. Solid plot that is not complex. But be aware the sex scenes are pretty blatant. As I said it was a solid 3.5 star read for me. I will definitely pick up Pete's book and see how he fares the love game.

I received this as an ARC from the author in return for an honest review.
Posted by Toni at 5:25 AM No comments: