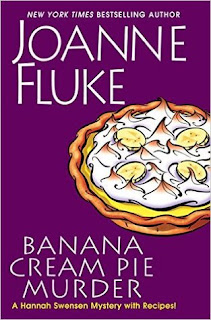 Goodreads synopsis:
A romantic seven-day cruise is the perfect start to bakery owner Hannah Swensen’s marriage. However, with a murder mystery heating up in Lake Eden, Minnesota, it seems the newlywed’s homecoming won’t be as sweet as she anticipated . . .

After an extravagant honeymoon, Hannah’s eager to settle down in Lake Eden and turn domestic daydreams into reality. But when her mother’s neighbor is discovered murdered in the condo downstairs, reality becomes a nightmarish investigation. Victoria Bascomb, once a renowned stage actress, was active in the theater community during her brief appearance in town . . . and made throngs of enemies along the way. Did a random intruder murder the woman as police claim, or was a deadlier scheme at play? As Hannah peels through countless suspects and some new troubles of her own, solving this crime—and living to tell about it—might prove trickier than mixing up the ultimate banana cream pie . . .

Before Hannah Swensen can return from her honeymoon with new hubby, Ross, Hannah’s mother stumbles over a dead body in the apartment downstairs from her.  Delores thinks she can be just like Hannah and do some sleuthing. But what she finds is more than she can really deal with. Thank goodness Detective Mike is on it and comes to Delores’s rescue.

Hannah returns to a great housewarming party in her new condo with Ross. Everyone had gotten together and renovated her new digs. I am not sure I would be so happy to now people broke into my house  just to put their on stamp on my new place.

When her sister, Michelle, needs a new place to stay after taking over as the director of the musical the dead woman had been running (dead woman is Mayor Bascomb’s sister Tory), Hannah starts to realize she will need to confer with Ross about a lot of things she never considered … like asking Michelle to stay with them. When she was single, she never had to let anyone know what she was up to.

I enjoyed this book on many levels. I always love seeing one of my favorite series put out another book, but it seems like a lot of the regulars are demoted to “friend who brings the pizza” or “friend who picks locks”. Ross is pretty much the invisible husband who has no personality and barely makes an appearance. I miss getting to se Mike and Norman in more out front roles. Fluke has pulled in Hannah’s sister and her partner, Lisa, to give someone for Hannah to bounce ideas off of. The dynamics have really changed in these books.

There is quite a twist at the end which I think will make a lot of the die hard Hannah Swensen fans really happy. So I am hoping for business as usual in many future books.