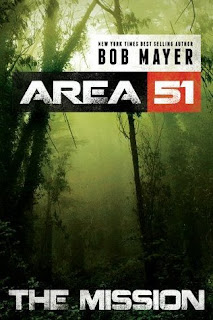 Goodreads synopsis:
Book 3 in the Area 51 series
The bubonic plague was a trial run. Ebola was a dress rehearsal. The real destruction begins now, and, if the Airlia are successful, the result will be total annihilation of the human race…
Deep in the Amazon rain forest, villagers are falling to an unseen enemy—a brutal virus that inflicts plague-like symptoms and certain death. There’s no cure for this Black Death, only the threat of imminent worldwide contagion. And the source, it seems, is not organic.
Scientist Lisa Duncan and Special Forces officer Mike Turcotte suspect the Airlia. Now that Area 51 has been exposed and a fleet of the aliens’ warships destroyed, the virus could be the Airlia’s last weapon. Duncan and Turcotte believe the source of the virus—and possibly their salvation—may lie with a mysterious place called the Mission, where they hope to give humankind a chance at survival. But the battle has only begun…

The movie about Area 51 continues where the previous book ended. Nothing is wrapped up. The world is still in danger and it looks like the alien agenda is winning.

I can’t really comment too much. It is such an ongoing thing that saying this section is good or that section is good would never cover it all. Lots going on in this story. Lots of characters. I am listening to it on my Kindle and doing it that way helps me keep the multiple storylines straight.

Lots of books to go in the series so I don’t see the drama ending very soon. I will definitely delve into the next book in the series when I get a craving for sci-fi.

I bought this book with my own money.
Posted by Toni at 12:40 PM