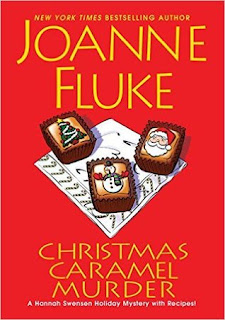 Goodreads synopsis:
Christmas normally descends on Lake Eden, Minnesota, as gently as reindeer alighting on a rooftop—but this yuletide season the only thing coming down Hannah Swensen’s chimney is a case of murder . . .

The holidays have arrived, and Hannah and her good pal Lisa have agreed to provide all the goodies for the town’s annual production of A Christmas Carol. But before anyone can say “Bah, humbug!” a Santa-sized sackful of trouble ensues. Like the fact that Lisa’s husband will be playing Mr. Claus to his ex-girlfriend Phyllis Bates’ Mrs. Claus. Or that before the curtains even go up Phyllis is found dead in the snow—wearing a costume that the real Mrs. Claus would put on the naughty list. Soon after the suspects pile up faster than snowdrifts in a blizzard, while a merry murderer remains on the loose. With clues even harder to find, it might take a visit from ghosts of Christmas past to wrap up this mystery in time for the holidays . . .

Includes Over a Dozen Holiday Recipes from The Cookie Jar!

If you say the name Hannah Swensen, I would have to say that I am definitely a fan. I love the world Fluke has created. It just makes me happy to dive into each title. I think I own them all by now.

This title wasn’t very big but it had a great story for the Christmas holiday.

Santa has been murdered and it is up to Hannah to find out whodunit since her friend, Lisa’s husband is suspect number one!

Don't want to give anything away on this one. Just check it out. It is quick read.

All around great stuff. You definitely won’t be disappointed.

I bought this book with my own money.
Posted by Toni at 2:37 PM