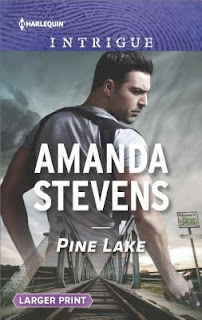 Goodreads synopsis:
SLEEPWALKING WITH DANGER The murder of security expert Jack King's girlfriend has haunted him for fifteen years. Returning to Pine Lake, Texas, where the townsfolk still consider him suspect, might not be the smartest move, but a killer seems to be holding up a mirror to his past. The same witness to this new murder was also present the night Jack's girlfriend dieds...but both times, she was sound asleep...Sleepwalking has gotten Olive Belmont into some sticky situations. Being the witness to both murders may have put her on the killer's list. Even so, she doesn't think the killer is Jack and is willing to help him. But will putting his past to rest ease her mind or leave her with even greater nightmares?

Jack pretty much gets duped into coming back to his hometown to get closure on an old murder he had originally been charged with. And you know how small towns are… they still think he is guilty even though he was not charged with the murder in the end.

I found a few of the situations a little “out there” in the “ hard to believe” category but the story was good, the characters were interesting and the whodunit kept me entertained for most of the book.

Definitely check this one out.