Dead to the Last Drop (Coffeehouse Mystery #15) by Cleo Coyle 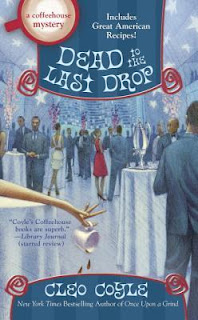 Goodreads synopsis:
When the White House asks coffeehouse manager and master roaster Clare Cosi to consult on a Rose Garden Wedding, she uncovers long-simmering secrets that threaten to boil over...

Clare’s Washington visit is off to a graceful start, when she lands a housesitting job in a Georgetown mansion and is invited to work on the Smithsonian’s salute to coffee in America. Unfortunately, her new Village Blend DC is struggling—until its second floor Jazz Space attracts a high-profile fan in the daughter of the President. But as Clare’s stock rises, she learns a stark lesson: Washington can be murder.

First a State Department employee suspiciously collapses in her coffeehouse. Then the President’s daughter goes missing. After another deadly twist, Clare is on the run with her NYPD detective boyfriend. Branded an enemy of the state, she must uncover the truth before her life, liberty, and pursuit of happiness come to a bitter end.

Cleo Coyle and her Coffeehouse Mystery series is one that I think you all should definitely try out. I have enjoyed all I have read so far.

This story is about the President’s daughter singing the blues/jazz in the Washington Coffeehouse Clare is trying to help bring more business. She has a lot to deal with in this story besides jus solving the murder. If it isn’t one thing it is another. But the overwhelming amount of story shoved into this book doesn’t make the reading of it overwhelming. It is as smooth as one of Clare’s gourmet coffee drinks.

At some point in the book… Clare is on the run… the prez daughter disappears… the head cook sabotages the coffeehouse when he gets fired…. a man dies in the coffeehouse kitchen… I mean, really a LOT of good stuff in this title.

I don’t want to give anything away so just go out and buy it. You won’t be disappointed.

I bought this book with my own money.
Posted by Toni at 2:46 PM