Book Review: Confessions of a Red Herring by Dana Dratch 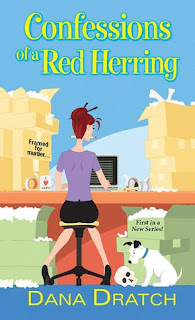 As a reporter, she’s used to covering the news.
Now she’s the headline.

Alex Vlodnachek has been a reporter for 12 years, a P.R. rep for three months, and a murder suspect for all of 24 hours. When her agency's double-dealing CEO is stabbed, scheming co-workers cast the new redhead as a compelling red herring. The story is media catnip—especially her salacious nickname: Vlod the Impaler.

Even Alex has to admit she looks guilty.

Out of a job and under suspicion, Alex is running low on cash, when she’s visited by a second disaster: her family. Soon her tiny bungalow is bursting with her nearest and not-so-dearest. To keep herself out of jail—and save what’s left of her sanity—Alex returns to her reporting roots. She goes undercover to reclaim her life, break the story, and unmask a murderer. Pretty much in that order.

What she doesn’t know: The killer also has a to-do list.
And Alex is on it.

I haven’t given a five star rating in a long time. This book was that great. I could really connect with the main character who used to work for a newspaper since I still do work for a daily newspaper. (And I do have a weakness for British chaps too.)

All the situations that happened to Alex had me involved in a plethora of emotions ranging  from fear to awe. It all seemed so plausible to happen in real life that I had to set the book down for a bit to find my bearings. This writer is that good.

She was gas-lighted and forced to work a horrible job just to get the evidence she needed to prove who had really done in her PR boss. There were a lot of characters introduced which is logical since this is book one in a series. And I think the author handled that well.

I felt bad for her brother who had almost as many ups and downs as she did during the duration of the book. I look to see him and grandma make more appearances in future offerings from this author.

Since book one was so amazing, I kind of wonder what is up for book two. I hope it is just as awesome.

I received this as an ARC (Advanced Reader Copy) in return for an honest review. I thank NetGalley, the publisher and the author for allowing me to read this title.
Posted by Toni at 1:40 PM No comments: