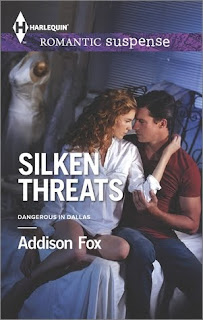 Everyone has secrets, and some will kill to keep them buried...

It started with a break-in. And though normally wedding dress designer Cassidy Tate could have handled it, having Tucker Buchanan's strong arms, quick wits and great dog as backup was reassuring The former army engineer turned architect was the perfect guy in an emergency--and the fact that he was willing to pick up the pieces was even more appealing.

Because it turned out it wasn't a simple robbery. Someone was after something in the shop Cassidy and her fellow bridal boutique owners shared. Now Tucker didn't want to let Cassidy out of his sight. But was that to protect her--or claim her for his own?


I have been a big fan of Addison Fox books in the past which is why I chose to read this one. But it didn’t do anything for me this time.  After reading the excellent “House of Steele” series, I felt let down with this. The quality wasn’t the same.

This title didn’t capture me and pull me full force into the world of the drama. This is sad since I really liked the author’s work previously. I just couldn’t get into the flow of the text. And I know that could be all me since I have been under a lot of stress at work and the focusing aspect of my brain wasn’t always in the fullest of effect.

I love a mystery and this had a good one. This story started off with a bang… literally. And the male point of view character was there to assist and begin the story. I personally was more interested in the mystery portion of the story than the romance. So when all the kissy-face stuff started, I was turned off immediately.

I know you are saying to yourself “why did she pick up a Harlequin book if she didn’t like romance?”I have found in the past that the books in the Romantic Suspense series are much more suspense than romance. I guess I got used to that format and took it for granted.

The basic premise of the book is that a secret held by some old-timers, one of whom owns Cassidy’s building, comes to light and puts Cassidy and her friends in danger. Tucker’s expertise and friends come in handy to assist with solving the mystery before anyone gets killed.

Overall, it was good. Decent. A solid book. I just couldn’t catch the wave of the flow of text and that was probably my own fault. I really enjoyed the mystery and would have liked to see that fleshed out a bit more.

If you love a bit more romance than mystery in a story, then this book is for you. Otherwise definitely check out her House of Steele series. You won’t come away disappointed.

I bought this book with my own money.
Posted by Toni at 12:02 PM