Review of Double Up by Gretchen Archer 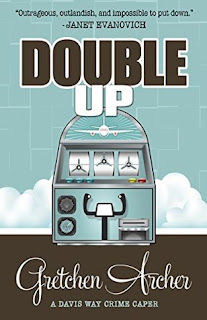 On behalf of USA TODAY bestselling author Gretchen Archer and the entire Henery Press crew, welcome aboard flight DOUBLE UP. Fasten your seatbelts for non-stop action as stiff competition blows into town and the resulting turbulence threatens to take down the Bellissimo Resort and Casino in Biloxi, Mississippi. Super Secret Spy Davis Way Cole, who lives on the twenty-ninth floor of the hotel with her CEO husband and newborn twins, takes it hard. If the casino goes belly up, she won’t be a stay-at-home mom because she won’t have a home. Not to mention her husband won’t have a job.

Davis can’t find a way to stop the inevitable end of the Bellissimo life she loves until her ex-ex-mother-in-law shows up, unexpected and definitely uninvited. Davis makes the best of a bad Bea Crawford situation and recruits her for a little corporate espionage work, which would’ve been great, had Bea not turned out to be the world’s worst spy.

Seatbacks and tray tables in their upright positions as we prepare for a bumpy ride with babies, bankruptcies, besties, and shrimp. (Shrimp?)

Davis Way starts out the book married to Bradley and fast-forward nine months has twin babies to care for. Needless to say, she is no longer the super casino spy girl and now a full-time mommy.

The first problem that crops up is a new casino is built next door on property previously owned by the Bellissimo. They were told it was supposed to be a football stadium but there was a bit of an illusion since the entire facility was covered until it was revealed and by then it was too late. Davis blames herself for letting the construction get so far. She was distracted by her new family and let her job fall by the wayside. The new casino was built and glitzier than ever. Not to mention, it was taking all the Bellissimo’s business including most of its employees.

Davis was in a bit of a post-baby birthing fog which was finally lifted when her ex-husband’s mother shows up on her doorstep wanting to see her grandbabies. (Even though, technically, she wasn’t related to them at all.)

The aggravation of  having Bea around knocks some sense into Davis. She is now out of her brain fogged stupor and ready to figure out how to save the Bellissimo from financial ruin.

I have to say that I really love this series world that Gretchen Archer has created. They are filled with a lot of suspense and nail-biting drama. Bea alone can give anyone a major case of stress headaches. Reading one title makes you yearn for more. I will always recommend anything from Gretchen Archer.

I received this as an ARC (Advanced Reader Copy) in return for an honest review. I thank NetGalley, the publisher and the author for allowing me to read this title.
Posted by Toni at 9:06 AM