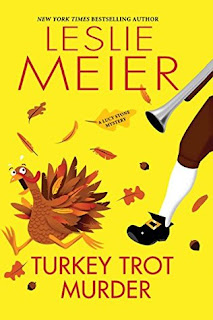 It’s late autumn in Tinker’s Cove, Maine, and the last surviving flowers on Lucy Stone’s porch have fallen victim to the first frost of the season. But as the part-time reporter learns, this cold November morning will claim more than potted plants . . .

Besides the annual Turkey Trot 5K on Thanksgiving Day, Lucy expects the approaching holiday to be a relatively uneventful one—until she finds beautiful Alison Franklin dead and frozen in Blueberry Pond. No one knows much about Alison, except that she was the daughter of wealthy investor Ed Franklin and struggled quietly with drug addiction. Police blame her death on an accidental overdose, but Lucy can’t understand what terrible forces could lead a privileged woman to watery ruin . . .

Alison’s funeral service is just as puzzling. Many believe Ed’s young—and very pregnant—new wife, Mireille, divided the family, leaving Alison to wither on the vine. Did Mireille truly adore her stepchild as Ed claims, or did she pit father against daughter for personal gain?

As a state of unrest descends on Tinker’s Cove, Lucy is thrown into a full-scale investigation. Now, in a race against time, Lucy must beat the killer to the finish line—or she can forget about stuffing and cranberry sauce . . .

The saying: “You never really know someone until they are gone” seems to resonate with this book. No one really seemed to know the victim well enough to make a reasonable deduction about her character traits or flaws.

The title opens with Alison Franklin going out from her morning run. When she makes the split second decision to run around Blueberry Pond, she has unknowingly sealed her fate. Little did she know there was a lot of drug activity around the pond and this fact makes many people in her life make assumptions as to why she was running there. She is approached by a woman who asks her to save her dog who had apparently fallen beneath the ice. Alison knows the ice is too thin. She doesn’t actually see said dog but she walks out anyway and of course, her fears are confirmed and she falls beneath the ice too. Not sure why this woman didn’t call the police for help but that will all wash out in the end.

Our protagonist, Lucy Stone, reporter for Tinker’s Cove local newspaper, finds the body of Alison and like any good investigator after she calls the police she calls in the story.

After the reports of Alison’s death hits the gossip grapevine, all sorts of theories as to why she died are waffled about. Everyone has a theory, even her father, who pretty much blames everyone not American in town, which is ridiculous. Most of the people he focused on were technically more American than he was.

This book was pretty good. I was able to catch the flow of the text which really speeds up how quickly I can read a book. I appreciate flow in a book. Watching the fallout from Alison’s father’s anger was kind of annoying but expected based on his assumption the Mexican drug runners had a hand in her death. Franklin’s anger and his job as a health inspector has ripple effects when a Mexican family wants to open a new restaurant in town. Franklin makes it his mission to put them out of business even though no one knows for sure if any of them or the Mexican cartel were involved. Having a mysterious killer behind it all made me evaluate everyone as I went along wondering the entire time whodunit and why.

I enjoyed this book and have already purchased a few more titles from the author. I am lucky that my local grocery store has a small offering of cozy mysteries and I pick up a few from time to time. This one was a winner for me. Kept me guessing the entire way though.