Book Review: Ring in the Year with Murder (An Otter Lake Mystery #4) by Auralee Wallace 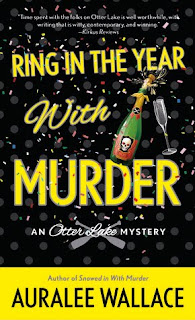 It’s been a tough year for Erica Bloom. And with hours left on the clock and a killer crashing the party, it’s not over yet…

This New Year’s Eve, Erica’s resolution is to have a great night―even if it kills her. She is, after all, at the party to end all parties: a Great Gatsby--themed gala sure to be the talk of Otter Lake, New Hampshire. With her perfectly finger-waved hair, borrowed pearls, and scarlet flapper dress, Erica is determined to be unflappable, despite the presence of her ex, Sheriff Grady Forrester, and his hot date, a bubbly blonde who has a hard time holding her drink. Literally. . .

In a plot twist as bizarre as a game of Clue, Grady’s girlfriend almost drops dead after her drink is poisoned. Who put the killer ingredient in her appletini? Suddenly the tables have turned and the sheriff has become the prime suspect. Now Erica has until midnight to clear the man she still loves―and in so doing just maybe win him back. That’s if the killer doesn't pop the cork again… and turn a New Year’s smooch into a kiss of death…

The intro of this book is very intriguing and sets the stage for the success of the entire book, in my opinion.

Erica Bloom is doing security at a New Year’s Eve party with her BFF Freddie Ng. Freddie is quite a hoot and such a great addition to the Otter Lake cast. I would enjoy seeing who he was in book one when he was Madame F, psychic/tarot reader. (Yes, I read the books out of order.)

Erica finds herself in an odd place in her life as the story opens. She wants Grady back but he is with Candace now. She also is at odds with Candace since MRG has taken the house she wanted practically from under her feet. Then there is Matthew, who owns the house where the party is occurring. She could have a relationship with him but dare she?

The flow of the book was good but the sporadic “morning after” sections were odd and I didn’t think truly necessary. I know others seem to love that part but to me it was just a bit of overkill.  It was a bit of a flash-forward to the end of the book as the characters of Erica and Freddie looked back to what had happened in the past. I think the author thought it helped explain events to the reader. But she had already done a good job of that, I thought.

I would have liked to see a bit more of Erica’s goddess power mother playing a tarot reader but I did get a kick out of the section where Erica tapped the High Priestess card and said it meant the person was a douchebag. Priceless.

Even though Erica is at odds with Candace she finds herself coming to her rescue over and over. She has become the appointed watcher of the real estate guru since said guru can’t be trusted to take care of herself, according to her sister.

I did enjoy this book and would recommend it to any cozy readers out there. Decide for yourselves about the morning after sections. Either way, I think you will enjoy diving into the world of Otter Lake.

I bought this book with my own money.
Posted by Toni at 2:10 PM