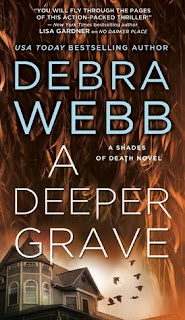 When the hunter becomes the hunted…

Serial-killer hunter Nick Shade built his legendary career chasing monsters—sadistic criminals with a gruesome thirst for death. When he rescued Montgomery detective Bobbie Gentry from horrific captivity and helped her reclaim her life, he didn't intend to be a hero. Or a target. But now a copycat murderer haunts him, and reuniting with Bobbie is his best chance at neutralizing the threat.

Bobbie can't forget the nightmares of her trauma—or the man who saved her. Working with Nick to outmaneuver the person behind a deadly vendetta feeds her hope that there's more to her world than ghosts and destruction. Maybe joining Nick's search for a killer is about gratitude. Maybe it's nothing more than cold revenge. But the only way they can protect themselves is to trust each other.

I want to start this off by saying that I have been a big advocate of Debra Webb from her beginnings at Harlequin. So me giving this book three stars is quite unusual. A lot of other reviewers gave this book five stars. So, keep that in mind.

I have to admit I had a hard time getting into this book. I was already at a disadvantage since I did not read book one. The flow of the text seemed off and I did not get enough character backstory to push me further into the pages of chapter one.

So, yes, I struggled with this one.

I did not find the main character engaging enough to follow and the secondary character of Nick seemed more lead man worthy than Bobbie. The interactions between Bobbie and Nick’s psycho killer father were the best parts of the book, in my opinion and that happened in the first quarter of the book.

I wonder if I would have enjoyed it more if I had read book one first, but since many reviewers said they thought you could skip book one, I did.

I suggest you read reviews by others if you enjoyed book one of this series. Otherwise, I would just skip this one and move on to another book in your TBR.

I received this as an ARC (Advanced Reader Copy) in return for an honest review. I thank NetGalley, the publisher and the author for allowing me to read this title.
Posted by Toni at 12:58 PM