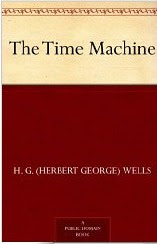 Goodreads synopsis:
First novel by H.G. Wells, published in book form in 1895. The novel is considered one of the earliest works of science fiction and the progenitor of the "time travel" subgenre. Wells advanced his social and political ideas in this narrative of a nameless Time Traveller who is hurtled into the year 802,701 by his elaborate ivory, crystal, and brass contraption. The world he finds is peopled by two races: the decadent Eloi, fluttery and useless, are dependent for food, clothing, and shelter on the simian subterranean Morlocks, who prey on them. The two races--whose names are borrowed from the Biblical Eli and Moloch--symbolize Wells's vision of the eventual result of unchecked capitalism: a neurasthenic upper class that would eventually be devoured by a proletariat driven to the depths. --The Merriam-Webster Encyclopedia of Literature

Sometimes when you read classics, they are dry and hard to get through. This was totally the opposite of that. It was fun and exciting and the story the main character relates is captivating and really holds your attention until the end. I have to admit, I did stay up late to finish this one.

It is amazing that H.G. Wells could foretell what could/would happen in the future when people became more enthralled with technology and becoming more lazy and more lazy. Kind of scary, actually. And he did this back in 1895! Wow.

Goodreads synopsis:
Why are prominent doctors and medical researchers all over the world interested in the extraordinary healings reported by the patients of Dr. Eric Pearl? What does it mean when these patients report the sudden disappearance of afflictions such as cancer, AIDS, and cerebral palsy? And what does it mean when people who interact with Dr. Pearl report a sudden ability to access this healing energy not just for themselves, but for others, too? What is this phenomenon?

Well, you might have to reconsider everything you've read up until now about conventional healing. The "new" frequencies of healing described by Dr. Pearl transcend "technique" entirely and bring you to levels beyond those previously accessible to anyone, anywhere. This book takes you on Eric Pearl's journey from the discovery of his ability to heal, to his well-deserved reputation as the instrument through which this process is being introduced to the world. But most important, The Reconnection reveals methods you can use to personally master these new healing energies

It took me forever to get through this book. I think I started it in 2017 and I finally finished it in 2019. It was an interesting read, for sure. But overall it was just average. I think that what Eric Pearl does is hard to relate in book form. I am sure in person it is probably an amazing experience. But somehow in print it fell flat for me.

Definitely check this out if you are into metaphysics or healing in any way. You might find it more compelling. 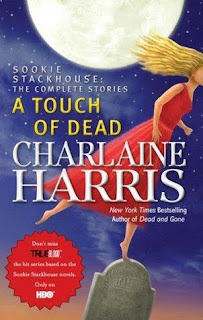 Goodreads synopsis:
Sookie Stackhouse works in a bar in small-town Bon Temps, deep in Louisiana. She's funny, pretty, very well-mannered - and she can read people's minds. That last point has proven a handicap in the dating game, but then along comes Bill, whose mind she cannot read. The trouble is, Bill just happens to be a vampire!

Fairy Dust from the collection A Touch of Dead
Popular character Sookie Stackhouse is the inspiration for the smash hit HBO television series True Blood. Featuring Sookie, "Fairy Dust" fleshes out the backstory of the fairy triplets featured in Charlaine Harris' bestselling novels.
Considering Sookie's telepathic abilities, it stands to reason someone might be interested in tapping her for a little information. But when Claudine asks Sookie to read some people, this seemingly innocuous request soon breeds deadly consequences.
As with the full-length entries from the Sookieverse, veteran narrator Johanna Parker provides a riveting performance seeped in Louisiana ambience.

Was this the best Sookie Stackhouse book? No, of course not. These are just small short stories that fit inbetween a lot of different books in the series. If you hadn’t read many of them, you might find this book a bit confusing. But I found it quite entertaining. It brought me back to my love for the series. And now I want to re-read them all starting at the beginning. Let the games begin!