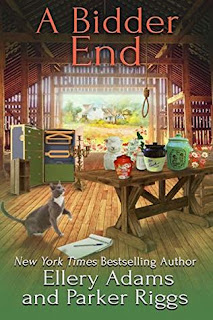 Kindle Edition, 151 pages
Published March 6th 2019 by Beyond the Page

In the world of antiques and collectibles, it helps to have a sharp eye for quality, a good ear for gossip, and a nose for murder.

When a retired Hollywood A-lister decides to auction off part of his enviable collection of antiques, reporter Molly Appleby is thrilled to be covering the event for Collector’s Weekly, and she’s certain it will secure the reputation of the dealer handling it, a friend of hers. But soon after the final gavel comes down, the actor’s secretary vanishes and the antiques dealer is found dead, apparently having taken his own life. Molly’s not sold on the coroner’s verdict of suicide, though, and she can’t help but start digging for clues to what she suspects is foul play.

As she begins to delve into the private life of her friend and his connections with the actor’s staff, Molly slowly discovers that the dealer was far more unscrupulous than she ever imagined and that nearly everyone who knew him had a motive for murder. And when another body turns up and the devious killer begins leaving mysterious clues to taunt Molly and the police, Molly finds herself facing a cunning culprit who wants to see her going, going, gone . . .

"As I have been reading this title, I realized it seemed very familiar. As I did a little investigating into my Goodreads history I discovered I had read book one in this series a few years back. Nice to see it is still going strong.

I enjoyed revisiting the characters here. Of the majority of the books I have read over the years, this series stands out to me. Now, I couldn’t have told you any of the character’s names but the antique auction, the uber bad guy and the pottery made book one in this series stand out in my mind.

The characters here were interesting and the setting was as appealing as I remembered it. I was happy to jaunt along with Molly as she met the retired actor selling off his huge collection of things. It was kind of sad, really. He sold all this stuff because his new wife, who was the same age as his daughter, told him to. She was more minimalist, I guess. I believe this is set in Vermont, so I foresee a divorce in Atlas’s future since said wife really liked the night life and the action she found when he was still in the “biz”.

The death came early in the story and it was a familiar face to Molly, one of the men from an auction house. Molly inserted herself into the case early since she was a friend of the victim and the detective thought it was suicide in the beginning, Only Molly’s knowledge of the victim helped the case to fruition.

This was a fun and complex mystery. The flow of the text was excellent but I did have a bit of trouble navigating between the three men with the names that started with J. I do recommend this to all who love a good cozy mystery. Take my advice and check out all the books in this series. You won’t regret it.


USA Today and New York Times bestseller author, Ellery Adams, has written over thirty novels and can’t imagine spending a day away from the keyboard. Ms. Adams, a Native New Yorker, has had a lifelong love affair with stories, food, rescue animals, and large bodies of water. When not working on her next novel, she bakes, gardens, drinks vats of coffee, spoils her three cats, and snacks on black licorice. She lives with her husband and two children (aka the Trolls) in North Carolina.
Posted by Toni at 11:57 AM