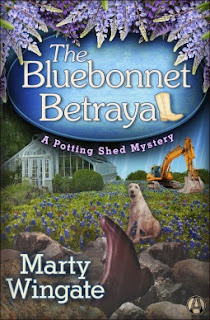 Pru’s life in England is coming full circle. A Texas transplant, she’s married to the love of her life, thriving in the plum gardening position she shares with her long-lost brother, and prepping a Chelsea Flower Show exhibit featuring the beloved bluebonnets of the Texas hill country. Technically, Twyla Woodford, the president of a gardening club in the Lone Star State, is in charge of the London event, but Pru seems to be the one getting her hands dirty. When they finally do meet, Pru senses a kindred spirit—until Twyla turns up dead.

Although Twyla’s body was half buried under a wall in their display, Pru remains determined to mount a spectacular show. Twyla would have insisted. So Pru recruits her husband, former Detective Chief Inspector Christopher Pearse, to go undercover and do a bit of unofficial digging into Twyla’s final hours. If Pru has anything to say about it, this killer is going to learn the hard way not to mess with Texas.

Pru Parke is a pure Texan with a heart for gardening and living in London with her husband, former Detective Chief Inspector Christopher Pearse.

What starts out as a favor for a friend ends up in murder.

Twyla Woodford had created a great garden to really showcase the Bluebonnets that Texas is known for by featuring this garden in the Chelsea Flower Show in London. Twyla and all her Texas gardening pals were making the journey across the pond to help with the set up.

But they are delayed and Pru puts in a few days of work to appease those in charge. And when Twyla finally shows up days after her comrades, she is found dead on the Chelsea Flower Show grounds.

Pru goes into immediate sleuthing mode and enlists the help of her hubby who goes undercover.

I thought this book was just great. I loved the setting of London and how well that was showcased throughout the story. I am definitely putting Marty Wingate on my must read list in the future.

I bought this book with my own money.
Posted by Toni at 2:13 PM