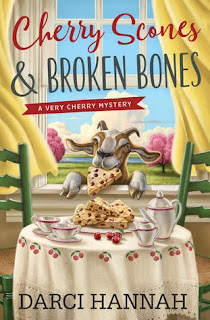 Goodreads synopsis:
For the Cherry Orchard Inn, "Cherry scones to die for" turns out to be all too true

Tainted by a recent murder, the Cherry Orchard Inn is struggling to attract guests . . . until celebrated portrait painter, Silvia Lumiere, books a room for the summer. Whitney Bloom, the inn's new manager, can't believe her good luck. Between her scrumptious cherry scones and the painter's remarkable talent, the inn swiftly becomes the center of the Cherry Cove art scene. However, all is not the bowl of cherries it appears. There's a rotten core in the portrait painter that only Whitney and her friends can see. And just as Whitney's baking skills and patience are pushed to their limits, another death occurs at the inn. With all fingers pointing at her, Whitney realizes it will take all her cherry-tastic talents to bake her way out of this one.
Genre: Fiction, Cozy Mystery, Food, Bed and Breakfast, Murder Mystery, Romance, Sequel

I wasn’t quite invested in this book until the portrait painter, Silvia, landed on the scene and put everyone in some sort of fix.  This woman was just mean, mean, mean. I wanted to knock her off her block for treating everyone like she did. I mean, I was feeling stress for all these people, especially Whitney. After that, I was all in. I was riding this cherry boat all the way to the end.

Other reviewers said they knew who the murder victim would be from the very beginning but I was clueless. I did not read book one in this series and so I wasn’t as familiar with the characters as others might have been. I felt all the characters were fully developed and you could remember who was who from scene to scene. It some books that is a challenge. No problem here. The character development was excellent, and the storyline really sucks you in. Just a stellar book.

I enjoyed the setting of Cherry Cove too. The references to Chicago and towns surrounding it made it seem like these characters lived in my backyard. I live in the southern part of Illinois and I wondered if I would stumble across any of the action. No really, but it was neat to think about.

This is a series I think cozy mystery lovers would enjoy. Definitely check this one out.


Darci Hannah lives in a small town in Michigan with her husband, three sons, lovable springer spaniel, Finley and golden retriever pup, Ripley. She is the author of Cherry Pies & Deadly Lies (Midnight Ink, 2018) and two previous works of historical fiction, The Exile of Sara Stevenson (Ballantine Books, 2010, 2nd edition by Piffle & Bombast 2016) and the Angel of Blythe Hall (Ballantine Books, 2011).
Posted by Toni at 1:35 PM