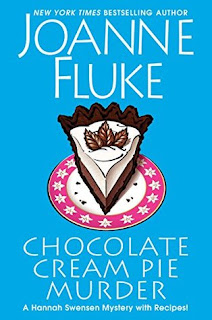 Goodreads synopsis:
Not even Lake Eden’s nosiest residents suspected Hannah Swensen would go from idealistic newlywed to betrayed wife in a matter of weeks. But as a deadly mystery unfolds in town, the proof is in the pudding . . .

When The Cookie Jar becomes the setting of a star-studded TV special about movies filmed in Minnesota, Hannah hopes to shine the spotlight on her bakery—not the unsavory scandal swirling around her personal life. But that’s practically impossible with a disturbing visit from the shifty character she once believed was her one and only love, a group of bodyguards following her every move, and a murder victim in her bedroom. Now, swapping the crime scene in her condo for her mother Delores’s penthouse, Hannah and an old flame team up to solve a case that’s messier than an upended chocolate cream pie. As suspects emerge and secrets hit close to home, Hannah must serve a hefty helping of justice to an unnamed killer prowling around Lake Eden . . . before someone takes a slice out of her!

This series never gets old. A guilty pleasure for sure.

I am not sure how much I can say about this book without giving the fate of Ross away. We were on the edge of our seats in the last book wondering if Ross would ever rear his ugly head again after up and leaving Hannah high and dry not long after they married.

He does show up again in this book after much worrying and wondering on Hannah’s part. She really does still love him despite the fact that he went back to is wife and in fact she and Ross had never been truly married.

I was scared for Hannah in this book. Ross was not like he was in previous books. I felt like he had been body snatched. The story was much like a locked door mystery where no one can quite figure out how it all went down and why. I don’t feel the synopsis above tells the story of what happened in this book very well. The TV special was just a minor blip on the radar, but some of the people Hannah had met from previous books did show up from back when she was on TV and Ross was producing.

I really liked this book because the use of the normal minor characters of Mike, Norman and Michelle were used in great ways. In other books, I felt like these characters were almost overlooked. She did that well in this one. I wonder now where Hannah’s eye will wander. So I guess we are back to the Mike or Norman question when it comes to her love life.

I applaud Ms. Fluke for the ingenious why she dealt with the character of Ross. I am sure this really appeased many of the fans who had not been happy when she had married
Ross.

If you love cozy mysteries, definitely pick this cozy up. It was a fun ride!

I received this as an ARC (Advanced Reader Copy) in return for an honest review. I thank NetGalley, the publisher and the author for allowing me to read this title.
Posted by Toni at 2:34 PM