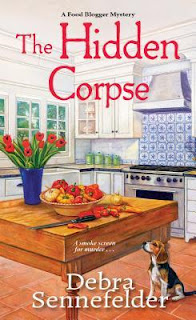 Goodreads synopsis:
Former reality TV baking show contestant and recent divorcée Hope Early is trying to find her recipe for success as a food blogger—but murder keeps getting in the mix . . .

When Hope’s elderly neighbor perishes in a home fire, she can't help but feel somewhat responsible. Only the day before, Peggy Olson had called her over, having burned a pot on the stove while she was sleeping and filling the house with smoke. In fact, she couldn't even remember cooking. Clearly, it was dangerous for the woman to live alone.

But it turns out she wasn't alone. When a second body is discovered in the basement of the burned house, suddenly what appeared to be a tragic accident is beginning to look like premeditated murder. As rumors spread like wildfire, Hope is determined to sort out the facts and smoke out a killer, but she might be jumping from the frying pan straight into the fire . . .

I felt Hope’s fear when her next door neighbor nearly burned her house down by leaving something burning on the stove. My mom has done that more than once. I felt the conflict when she struggled whether to tell the lady’s daughter about the incident. Then my heart sank when what she had most feared came to fruition.

When you read this book, you aren’t just reading. You are experiencing Hope Early’s world. I found the whole world of blogging fascinating. Sponsored post and making money from blogs just seems so  way beyond where I am but it sure does give you ideas how you can really delve into your blog and make money doing it too.

I thought the mystery was pretty complex. And Hope was quite ingenious in how she discovered the true culprit. I have to admit, I had no clue who it could be. I thought the romance flirtation between Hope and Ethan was fun and the scene with Matt and the date even funnier.

This one is just a real winner in my book. Cozy mysteries rock, don’t they? Definitely check this one out.

I received this as an ARC (Advanced Reader Copy) in return for an honest review. I thank NetGalley, the publisher and the author for allowing me to read this title.
Posted by Toni at 1:25 PM