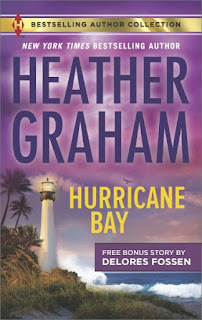 Goodreads synopsis:
Dane Whitelaw knows something about Sheila Warren that no one else does. Dane knows Sheila's dead.
The private investigator found a photo under his door--a picture of Sheila, strangled with his tie and posed on the beach of his private island in the Florida keys. The crime appears to be the handiwork of a serial killer currently terrorizing the Miami area. Now Dane knows he is being set up to take the fall for the killings. He just doesn't know why.
When Kelsey Cunningham's best friend goes missing, she confronts the one person she thinks will have information--Dane, Sheila's former lover and a man from Kelsey's own past. Kelsey follows Sheila's tracks into a dangerous world of sex, violence and drugs, with Dane right behind her. But the tentative trust between them shatters when Sheila's body is discovered--and Kelsey recognizes Dane's tie.
Now Kelsey doesn't dare trust anyone. Especially a man she can no longer deny she has always loved. Because here on Hurricane Bay, a devastating storm can hit without warning. And whether it's a tempest of unbridled passion or the desperate fury of a killer, nothing--and no one--is safe.

This was just okay for me. I thought this book was pretty hard to get into to start off with… Not to mention it was slow in building the tension and suspense. By about the half mark, things started picking up. The latter half of the book saved it from being a 2 on my scale. Characters were a lot more developed at this point and I was beginning to see what was going on.

This book could probably have been half as long and then it would have been excellent. I liked the story itself and the characters were memorable.  But just okay when all was said and done.

I paid for this book with my own money.
Posted by Toni at 8:48 AM