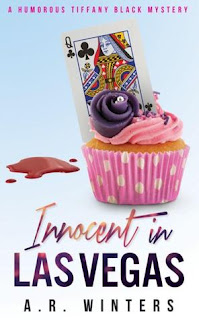 Goodreads synopsis:
Cupcake-loving croupier Tiffany Black is determined to leave her job at the casino for good. She's one small step away from acquiring her Private Investigator license, and has her eye on the prize.

Accepting her first real case - investigating the murder of casino-mogul Ethan Becker - should be exciting. Instead, things spiral out of control and Tiffany finds herself in over her head, as she confronts secretive suspects, corrupt casino henchmen and her mysterious, ex-Special Forces bodyguard.

Tiffany's poker-hustling Nanna and pushy parents want her to find a nice man and settle down, but Tiffany just wants to track down the real murderer before he finds her first...

I thought this book was interesting and had a lot of potential. I do wish it had been fleshed out a bit more. It wasn’t really clear why Tiffany was such a lover of cupcakes and why that addiction mattered to the storyline. Most of the covers in this series have cupcakes on them so I was just curious as to the why of it all. And maybe it was just because she liked them and met a man in her building who was a former pastry chef who liked to bake for his friends.

Before the book began, Tiffany’s family was already wondering why she wasn’t practically shacked up with a man named Stone and that kinda threw me. Then, almost after her initial meeting with Officer Nick three-fourths of the way through the book, Stone wanted to know if she liked him. That must have been an insta-karmic connection and how Stone found out about it so fast is anyone's guess. Things just seemed to happen too fast for me. I understand that this book is only 200 pages burt these characters are interesting, the plot had some meat to it and it really could have been a great book. I am hopeful that other books in the series develop things more and bring out a 4 or 5 star rating from me. Cross your fingers for me.

I bought this book with my own money.
Posted by Toni at 9:45 AM