BOOK REVIEW: Someone's Mad at the Hatter by Sandra Bretting 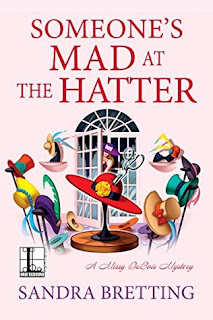 Goodreads synopsis:
Missy DuBois’s Louisiana hat studio is the destination for Southern brides who want to make a fashion statement. But designing headpieces isn’t her only talent, she’s also got a head for solving murders . . .

It’s not uncommon for folks to live it up a little too much on New Year’s Eve. But when Missy walks into her parking lot at Crowning Glory on New Year’s Day and discovers professional wedding planner Charlotte Deveraux inside a whiskey barrel, the poor woman isn’t just hung over . . . she’s dead. Since the murder weapon was an old hat stand that belonged to Missy, her customers are cancelling appointments and everyone in town seems to be turning up their noses at her. Despite plenty of intrigue to motivate a hatful of suspects, suspicion keeps falling squarely on Missy. All the more reason to clear her name—or the next veil she designs will come in a shade of black . . .

I am not sure why I haven’t picked up this book until now. It was published in 2017 but that didn't make it any less compelling. It was great. I loved the story of a hat designer framed for the murder of one of her fellow shop owners.

It was a hoot to watch Missy and how she stumbled through life as she forgot to eat her good luck beans, then discovered the hat stand that had killed the wedding planner had been made by her! It was a good thing a lot of the store owners knew her as well as law enforcement otherwise she might have spent the entire book in jail. It definitely looked like a frame job from the beginning.

I was surprised by who the killer ended up being but  that is what makes whodunits so fun… when you just don’t have a clue.

Definitely pick this cozy up. It was a fun ride!

I received this as an ARC (Advanced Reader Copy) in return for an honest review. I thank NetGalley, the publisher and the author for allowing me to read this title.
Posted by Toni at 2:10 PM