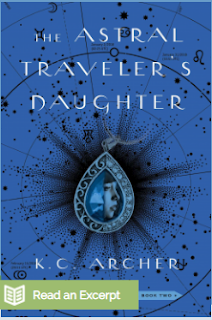 The Astral Traveler's Daughter
(School for Psychics #2)
by K.C. Archer

Goodreads synopsis:
Last year, Teddy Cannon discovered she was psychic. This year, her skills will be put to the test as she investigates a secretive case that will take her far from home—and deep into the pastin the thrilling follow-up to School for Psychics.

With trepidation, Teddy enters her second year at The Whitfield Institute, a facility hidden off the coast of San Francisco where students master telepathy and telekinesis, investigative techniques and SWAT tactics for covert roles in government service. She has been obsessively tracking the movements of the Patriot Corps, a secret organization that seems to be behind a string of crimes on US soil—including the disappearance of her friend, Molly. She is not sure who she can trust with her findings: her friends think she is crazy and her teachers insist she focus on her schoolwork.

Teddy tries to do what she is told. She tries to forget about her missing friend, her long lost birth parents, her rivalry with other students, even her forbidden romance with an instructor. She learns to be a meat shield: a Secret Service operative trained to protect whatever dummy they throw her way. She learns to disarm explosive devices. She also learn to transport herself through time, as she begins to grasp astral travel (that is, if she doesn’t get lost in the time-space continuum). But Teddy has never been good at following the rules. So when an unexpected assignment leads her to the answers she’s chased for so long, and reveal a clue about her own past, she takes a risk that puts everyone else she cares about in danger.

The next book in the series that Kirkus Reviews called “Harry Potter with a cast of millennials,” K.C. Archer’s The Astral Traveler's Daughter is a heart-racing novel set in a world very much like our own—but there is more to this place than meets the eye.

Before I started this book I had heard it was being compared to Harry Potter. Yes, there is what feels like magic but is instead students learning how to use all their different psychic powers. This felt more like real life X-Men than Harry Potter.

Students are discovering more uses for their powers and finding out how they could grow them to assist in the future when they worked for the FBI, Secret Service or Police Force.

There is a lot in this beyond the whole “school for psychics” thing. We follow a girl who has a lot of problems but is also quite capable of overcoming what others think isn’t possible for her. A missing girl from a previous book sort of plays into the storyline but I think this is more about how Teddy finds ways to work together with her friends as she expands her astral traveling and other powers, finds her mom, and realizes she can travel back in time and change things.

This would work great as a movie with special effects. I can totally see it on the big screen. Not just for teens. Anyone can enjoy this.

I received this as an ARC (Advanced Reader Copy) in return for an honest review. I thank NetGalley, the publisher and the author for allowing me to read this title.
Posted by Toni at 8:25 AM