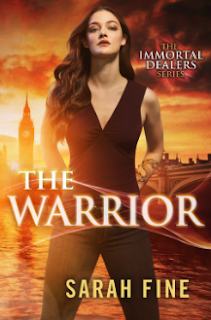 The Warrior
(The Immortal Dealers #3)
by Sarah Fine (Goodreads Author)

Goodreads synopsis:
For those who deal in the fate of the world, salvation and destruction are not games of chance.
Ernestine “Ernie” Terwilliger never intended to live among the Immortal Dealers, much less to be party to an ongoing battle where the fate of humanity is in the draw of a card. And the stakes have gotten only higher now that a shady new Forger has been crowned.
Virginia may be in charge of creating the chaos that makes the universe tick, but her assignments have been noble—each one in the aid of strangers. But when Ernie discovers Virginia’s true purpose, she realizes it’s going to take an entirely new kind of play to stop her.
The game changer lies within a mysterious artifact dredged from the ocean. To unlock its powers, Ernie and her partner, Gabe, must traverse dangerous new realms and uncover the history of Forgers past. Joined in a tenuous alliance with a former enemy and stalked by old friends turned lethal foes, Ernie had better play her cards right—because this time, the whole universe could be destroyed in the shuffle.

This book is the third book in the Immortal Dealers series. I had not read the first two books but didn’t have any problem getting the gist of the setting and characters practically from the get go. And that is saying something considering there are a lot of characters roaming around in this world.

I didn’t feel like there were any truly unnecessary scenes. Everything just kept moving forward as they tried to quell the rein of the uber bad guy (bad girl?) Vivian. I am not going to give away any of the cool action that happens in this book but I did expect a big Voltron/Power Rangers moment at the end which I wasn’t disappointed by.

Great novel. Cool action. Rememberable characters. Just a great series. I wonder if athis is the final book in the series. It sort of felt that way. I picked up the first two books in the series just so I could read up on the luscious backstory.

This is a definite recommendation to everyone. Don’t be scared away by any stereotypes you may come in having with what you think this book is going to be. Read it. You won’t be disappointed.

I received this as an ARC (Advanced Reader Copy) in return for an honest review. I thank NetGalley, the publisher and the author for allowing me to read this title.
Posted by Toni at 7:58 AM