BOOK REVIEW: You Say Goodbye by by Keith Steinbaum 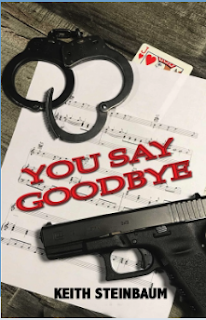 Goodreads synopsis:
After a temperamental meltdown on stage, Sean Hightower, a regretful and resentful “one-hit wonder” rock musician seeking a comeback, returns to his girlfriend’s condo wanting solace from the woman he loves. But after letting himself in, he discovers her naked body on the bed, murdered from a bullet to the head. When the police detective arrives and sees the two taped pieces of paper on the wall with the word, “hello,” on one and “goodbye,” on the other, he realizes that the renowned serial killer, The Beatles Song Murderer, has struck again. In the days that follow, he reaches another conclusion—the Beatles Song Murderer is probably somebody Sean knows. Now the detective needs Sean’s help to find the killer.

I am not sure what I was expecting based on the cover of this book: classic detective fiction, maybe? But what I found was an angry former musician, one-hit-wonder, playing for peanuts in a dive bar, working at his dad’s dealership and through it all finding himself and his passion again after the death of his girlfriend.

I felt like I was peeking into this real guy’s life and watching as he figured out how to navigate all the challenges that kept coming up and trying to throw him off course. At first he just wanted to get his new song heard and have it catapult him back into the music career of his dreams.

I felt bad for this guy. His life was crap. He wanted to die at one point and he discovered how the friendship he opened himself up to made his life better than any rock star career.

In the midst of it all, the detective in his girlfriend’s murder case kept coming to him for assistance. Not sure this would happen in real life but it made for good distraction for Sean while he figured it all out.

If you read this book, I encourage  you to check out the blog post the author wrote on The Write Way Cafe. I am leaving a link for it here. Good stuff. https://thewritewaycafe.blogspot.com/2018/09/keith-steinbaum-shares-inspiration-for.html#.XKeymetKiEU