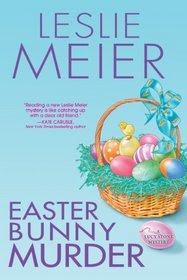 Goodreads synopsis:
Spring has sprung in Tinker's Cove, and Lucy Stone has a mile-long to-do list. From painting eggs with her grandson, to preparing the perfect Easter feast, to reviving her garden after a long, cold winter, she hardly has time to hunt for a killer with a deadly case of spring fever... Lucy has always loved covering the annual Easter egg hunt for the Pennysaver. Hosted by elderly socialite Vivian Van Vorst at Pine Point, her luxurious oceanfront estate, it's a swanky event where the grown-ups sip cocktails while their children search for eggs that are as likely to contain savings bonds as they are jelly beans. But when Lucy arrives with her three-year-old grandson, VV's normally welcoming gates are locked, and a man dressed as the Easter Bunny emerges only to drop dead moments later… Lucy discovers that the victim is Van Vorst Duff, VV's grandson, and soon learns that not all is as it seems at idyllic Pine Point, where the champagne and caviar seem to be running dry. Always a social butterfly, VV has been skipping lunch dates with friends, and her much-needed donations to local charities have stopped with no explanation. Maybe she's going senile, or maybe her heirs are getting a little too anxious to take over her estate… As Lucy gathers a basketful of suspects, she's convinced someone's been hunting for a lot more than eggs, and she'll have to chase the truth down a rabbit hole before the killer claims another victim…

This series is really growing on me. and it shows clearly why you shouldn’t judge a whole series based on your feelings about one book.  The first book I read in this series wasn’t my favorite. It was just okay and I considered not returning to Tinker’s Cove because of it. Every book I have read since has been getting better and better. Mysteries more complex. This and the St. Patrick’s Day Murders have been two of my most favorite.

This book had a pretty complex mystery that I was cheering the author for crafting. When the guy in the bunny suit died I was more concerned for the rich lady in the house being practically held captive  by her family and I could already tell was being mistreated. Elder abuse just screamed at me from the pages. Meier really made me feel with this one.

There was one surprise after another. And I was indeed shocked by who the culprit ended up being. Very clever plotting. I liked it. Definitely check this one out if you have been wanting to add Leslie Meier to your TBR stack.

I bought this book with my own money.
Posted by Toni at 7:18 AM