BOOK REVIEW: Murder at the Palace by Margaret Dumas 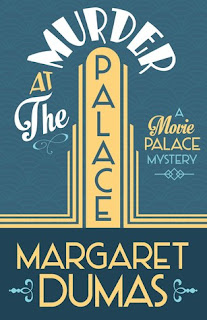 When Nora Paige's movie-star husband leaves her for his latest co-star, she flees Hollywood to take refuge in San Francisco at the Palace, a historic movie theater that shows the classic films she loves. There she finds a band of misfit film buffs who care about movies (almost) as much as she does.

She also finds some shady financial dealings and the body of a murdered stranger.

Oh, and then there's Trixie, the lively ghost of a 1930's usherette who appears only to Nora and has a lot to catch up on. With the help of her new ghostly friend, can Nora catch the killer before there's another murder at the Palace?

First thing I have to say is WOW! I love this book. The writer sure knew her stuff when it came to old movies. I resonated with this title because I used to work at a movie theater when I was a kid in the 80's. Our theater could only show two movies at a time, though.

When this book started out everything happened so fast. The first dead body was discovered two weeks before the main character set foot in the theater. Then, minutes after arriving, Nora stumbled over body number two. (That is just a figure of speech since you can't literally stumble over a body shoved in an ice machine.) because of this fast happening plot movement I wondered what was in store for the rest of the book. I didn't want the plot to burn out by chapter two.

I know one thing for certain, Henery Press has a catalogue of amazing authors.  And they wouldn't let me down. They never had before.  So I pulled up my boot straps, pushed the reservations aside and dove head first into the book. I am so glad I did. This is one of the best books I have read all year!

I am not going to give anything away about the plot but I did figure out what the McGuffin was early on. I am not sure many would so I don't want to spoil the whodunit fun. A McGuffin is a plot device in a movie which is a specific thing people keep searching for like the statue in the Maltese Falcon.  There is an item like that in this story where the characters don't actually know what it is but know they need to find it.

This whole book was top notch. I about missed leaving for work on time since I wanted to finish reading the last pages. I hope that ending is a foreshadowing of more antics in the Palace Theater coming soon. That would be even more awesome.

Check this one out cozy mystery fans. You will love it.

I received this as an ARC (Advanced Reader Copy) in return for an honest review. I thank Edelweiss, the publisher and the author for allowing me to read this title.
Posted by Toni at 11:32 AM